The US President slammed the Iran War Powers Resolution, calling it an electoral ploy and an “insult”. 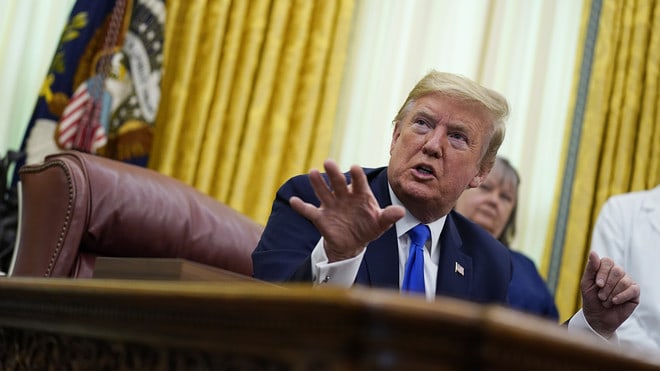 US President Donald Trump is using his veto powers to annul a resolution that enjoyed bipartisan support. The ‘Iran War Powers Resolution,’ the informal name for resolution S.J. Res. 68, aimed to curtail presidential powers in making war with Iran. The resolution was first introduced in January after the Trump administration conducted a drone strike on Iraqi soil that killed senior Iranian general Qasem Soleimani.

The strike on the Iranian official brought Iran and the United States close to a state of war, as the influential Iranian leader’s funeral drew enormous crowds of angry mourners. The legislative side of the US’ trias politica, which delegates power to the three different branches of government, had not been informed about the controversial move, sparking the introduction of the resolution aimed at curbing presidential war powers.

The White House released a presidential statement on May 6, calling the resolution “unnecessary and dangerous.” The statement said the resolution would “endanger the lives of American citizens and brave service members.” Written from the president’s perspective, the document underlined that peace with Iran was a reality only because of Trump’s “decisive actions and effective policies.”

While the Trump administration had initially justified the drone-strike that killed Soleimani as a defensive act to prevent an ‘imminent threat,’ the May 6 White House statement clarified there was no such threat.

In public remarks, the US President called the resolution “insulting” and implied the resolution was part of a Democratic electoral move to undermine him ahead of the upcoming presidential election.

President Trump said Republicans who joined Democrats in approving the resolution had “played right into the Democrats’ hands.” The US president is eager to secure support after an embarrassing turn of events. His plan to end the COVID-19 task force met with such uproar that he reversed the plan, saying the task force was “more popular than he realized.”

The resolution had not garnered sufficient votes to avoid Trump’s veto, but on Thursday the Republican-controlled Senate will be voting on whether to override Trump’s decision and force through the act. Republican lawmakers have been cowering in fear of Trump’s fury since his election and little resistance is expected.

The resolution aimed to curtail what many see as reckless war-mongering by the US president, who has surrounded himself with yes-men and Republican ‘Hawks’, politicians eager for war. While Trump initially promised his supporters that he would scale down America’s conflicts in the Middle East, his first term has seen a steady escalation with Iran.

The US has abandoned the international agreement intended to prevent Iranian nuclear ambitions and reinstated crippling sanctions on the country. The sanctions have led to severe economic damage, reducing Iran’s vital oil exports by 95% as international businesses are reluctant to trade with Iran lest it invokes the ire of the United States.

The sanctions have had a chilling effect on Iran’s efforts to import medical supplies in the face of the global COVID-19 pandemic. Though the UN, WHO, EU and China have implored the US to temporarily halt sanctions in order to save Iranian lives, the US appears eager to increase them. The American “maximum pressure campaign” aims to make life so miserable for the Iranians that they will be forced to the negotiating table on American terms.

But the sanctions have only further entrenched the two nations as Iranian politicians refuse to talk to the US as long as American hostilities, like sanctions and the encirclement of Iran with US military bases, continues.

Meanwhile, the US is trying to extend a weapons embargo on Iran, using its former status as a signatory on the Iran nuclear deal to force the embargo to continue. Iran in its place has increased tensions by launching a satellite into orbit for ‘defensive military purposes.’

With the resolution set the fail on Thursday, Iran and the US inch closer to conflict, even as both countries suffer tremendously from the COVID-19 pandemic. In what could have been a moment of shared suffering and support, the continuous posturing is likely to only further entrench mutual suspicions and dehumanization.