Trump says the US is outperforming other countries and the country is ready for phase two. 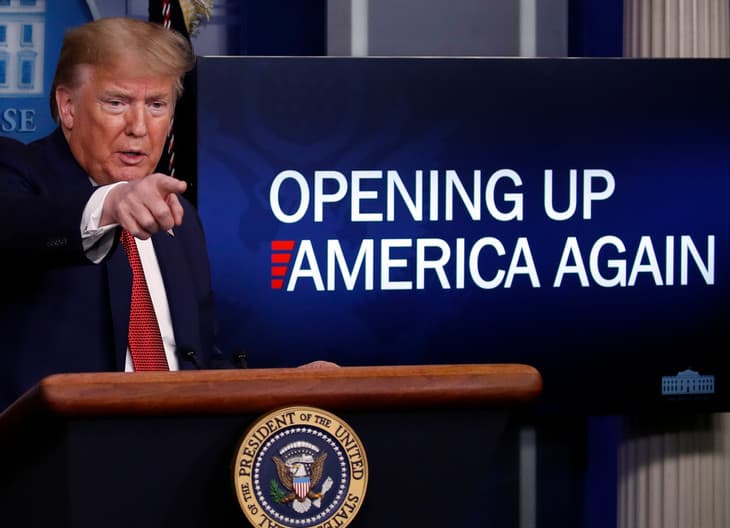 “Nobody has done the job we have done,” Donald Trump said in a May 5 press conference after reporters asked him whether he is planning to shut down the task-force that is managing the US COVID-19 epidemic. The US president claimed the country had more cases than other countries merely because the US had outperformed other countries in testing.

The US president pulled a printed chart from his pocket to show the increase in US testing relative to other countries, saying the South Korean president telephoned him to congratulate him on “our great testing.” Trump stated that the task-force has done a “phenomenal job” in producing ventilators, saying only one person in the entire country did not get a ventilator when needed.

“We are helping other countries and stockpiling, in case some tragedy like this happens again,” the president said as he indicated the country is doing so well that its ready for reopening. The president proudly showed the US had performed 7 million tests, “the quality of our tests is also the best,” the president said.

Winding down the task-force

Trump indicated his task-force had been so successful that there was no longer a need for it. “We are now helping other countries,” Trump said as he told reporters the shortage of ventilators had been solved, and now the focus would go to “safety and reopening.”

“We will have something in a different form,” the president said, indicating the task-force would soon be dissolved. The president said his vice-president Mike Pence had talked to all 50 governors via conference-call, “it was the best call we had, thus-far” he confidently stated.“They have everything they need.”

Mike Pence and the task-force DID a great job, but Trump stated he was now looking to reopen, “we will have a different group set-up for that.”

The news first broke when the New York Times reported that task-force members had been informed of the group’s impending disbandment. Vice-president Mike Pence then confirmed the task-force would be winding down, saying the Trump administration is eyeing Memorial Day, May 25.

But, as the vice-president made his remarks, a CBS television crew was interviewing the Task-force’s top infectious disease expert Anthony Fauci who said he had “heard nothing about that.”

The fact that the top expert on the task-force had not been included in the discussion to disband the task-force reveals that there are opposing ‘camps’ within the task-force. Fauci has been roundly criticized by Trump supporters for contradicting the president and the infectious disease expert has even received death threats that precipitated the need for increased Secret Service protection.

Trump’s claims that the US was outperforming other countries in testing was refuted on May 1 as Billionaire, and self-proclaimed public health expert, Bill Gates called US testing results “bogus.” In an interview with CNN, Gates said “very quickly, you can get back into exponential growth” if the US reopens too soon, saying that “in Asia the testing is ofa far higher quality than that of the United States.”

Gates indicated that high-income people in the US will have been tested while low-income people have not, because prioritization is not done based on need or risk. The billionaire pointed to South Korea as an example where testing kiosks had been successful, but indicated that the US testing capabilities were too slow and not available to anyone who might be symptomatic.

Ironically, three days before Trump revealed a printed chart showing the growth in US testing, Gates said: “These charts people show, there all all those bogus tests and the inequity all built into that funny number.”

Gates’ criticism of US testing is backed by several experts. Nobel-prize winning economist, and Senior Vice-President of the World Bank, Paul Romer said the entire country needs to be tested every two weeks, at a cost of $100 billion a year, in order to reopen.

The US is currently conducting what Gates calls “200,000 bogus tests a day,” instead of the 20 million daily tests that are required according to experts. The Trump administration said that doing 5 million tests a day was impossible, even though Trump has promised it would be a reality “very soon.”

Increasing the amount of testing to just 5 million would mean a 25-fold increase in US testing capabilities.

Trump’s claim that US testing has meant the country is ready for “phase two” in reopening certain sectors of the economy is disputed by the US Institute for Health Metrics and Evaluation. The institute has released a projection showing 135,000 US COVID-19 deaths through the beginning of August, with eased lock-downs as the main contributor.

While the US President continues to blame China without evidence, he appears ready to ‘move on’ from the crisis in order to limit damage to the US economy.

Read also: Erdogan Concedes to US in Letter to Trump