The US is the largest IMF shareholder, which positions the country to veto requests that oppose its strategic interests. 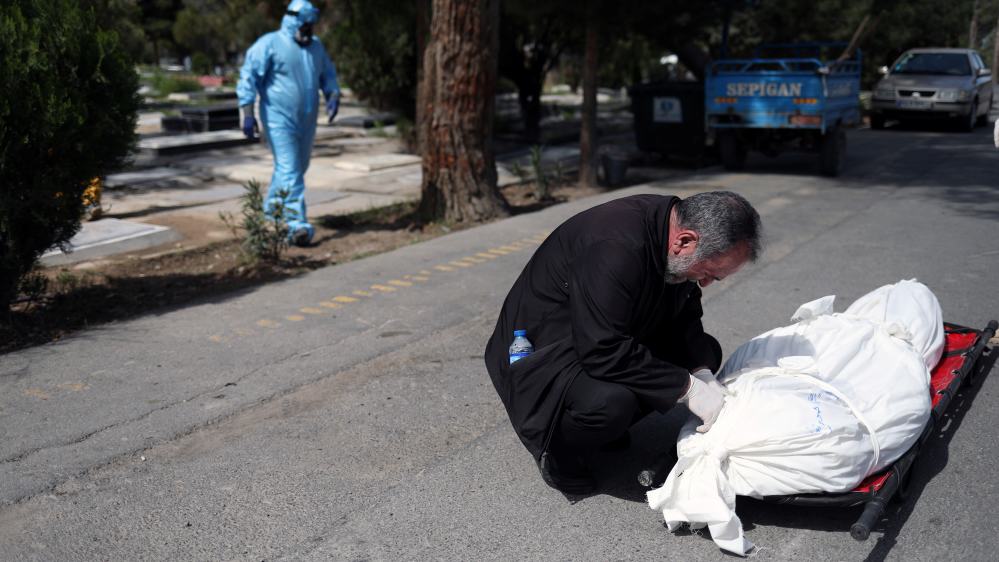 Speaking from a televised Cabinet meeting, Rouhani repeated his entreaty to the IMF, saying a failure to grant the loan would amount to discrimination.

“We have not asked for anything from the IMF in the past 50 years, and we have met all our obligations; should the Fund not fulfil its responsibilities in these hard times, the world will interpret it differently,” Rouhani said.

Rouhani did not miss the opportunity to lash out at the United States and its economic sanctions, saying, “history will never forget that the White House, which was an economic terrorist, has now become a terrorist in the medical field, too.”

The Iranian Prime Minister’s rhetoric is the latest in a war of words between the US and the rogue Persian state on economic sanctions and COVID-19 assistance. His latest comments echo those of Iran’s Foreign Minister Javad Zarif who also accused the US of “medical terrorism.”

This time, however, it appears that Rouhani’s claims have some basis in fact. Reports are circulating that the US is indeed trying to block the IMF from loaning money to Iran.

The US is the largest shareholder in the IMF and can wield its 16.5% of votes to stonewall loan requests. The European Union, who appear to favor the Iran bailout, could theoretically, alongside other members, accumulate a majority of votes to okay the loan, and circumvent US opposition.

The Trump administration maintains that, despite its aggressive program of economic sanctions, Iran has sufficient cash accounts available to cover the economic and public health costs associated with fighting its massive coronavirus outbreak.

“The world’s leading state sponsor of terrorism is seeking cash to fund its adventurism abroad, not to buy medicine for Iranians,” a US State Department source told Al-Monitor on April 7.

White House officials who spoke to the Wall Street Journal believe any new funding from the IMF would not be used to fight COVID-19 but diverted to sure-up the economy or fund terrorism.

“The [Iranian] regime’s corrupt officials have a long history of diverting funds allocated for humanitarian goods into their own pockets and to their terrorist proxies,” stressed the State Department spokesman.

The IMF has confirmed that it is in talks with Iran regarding the loan.

Iran, who has not accessed IMF support since receiving “standby credit” between 1960 and 1962, applied for a $5 billion loan on March 12.

All member states “facing an urgent balance of payments need” can apply for access to a Rapid Financial Instrument through the IMF.

US Sanctions and Offers of Assistance

The US has offered to provide unilateral COVID-19 assistance to Iran, and reiterated that sanctions do not target medicine or health devices. However, its regime of secondary sanctions has made ventilators and other equipment hard to come by. Financial institutions and companies avoid doing business with Iran for fear of falling foul of the US’ measures.

Despite devastation from the pandemic, Iran’s Supreme Leader Ayatollah Ali Khamenei rejected the US’ offer of assistance on March 22, calling the US leadership “liars and charlatans” and saying Iran is suspicious of their proposal.

Iran has continued its calls for the US to lift its sanctions on humanitarian grounds.

“We had always said the sanctions are unjust but coronavirus revealed this injustice to the world,” Foreign Minister Javad Zarif said in a video.

Zarif’s US counterpart, Secretary of State Mike Pompeo, hit back on Twitter, writing that Iran’s “concerted effort to lift U.S. sanctions isn’t about fighting the pandemic. It’s about cash for the regime leaders.

It appears that even the coronavirus pandemic is not enough to stop Iran and the United States from trading tit-for-tat accusations or to reduce the tension between the two countries. Instead, the bitter adversaries see opportunity in the unfolding crisis.

Iran has sighted a means to secure a reprieve from economic sanctions. “Iran sees an opportunity to leverage the coronavirus to pressure the U.S. to ease its maximum pressure policy because they are at a deadlock with the economy,” Iran-based economist Siamak Ghasemi told the New York Times.

“Of course sanctions relief will give the government more financial resources to battle coronavirus, but they are also thinking long term,” Ghasemi said.

The US sees the devastating COVID-19 outbreak in Iran as another nail in Khamenei’s coffin, and a step closer to Iran’s capitulation.

The International Crisis Group’s Iran Director Ali Vaez argues, “the Trump administration believes that the outbreak has succeeded where sanctions failed to weaken the economy even further.”

“They think that the timeline for bringing Iran to its knees has shortened because of the coronavirus,” Vaez added.

It is impossible to ascertain the direct impact of discrete factors such as the Iranian regime’s bumbling response and lack of medical supplies due to sanctions, or cultural factors such as licking shrines, have had on the spread of the virus in Iran.

What is evident, is that a combination of circumstances created conditions which allowed the novel coronavirus to spread rapidly throughout Iran, killing 3,993 Iranians if the regime’s figures are to be believed, and in reality likely many more.

There is not yet any clear advantage to be won by the US, who is itself now struggling under the burden of COVID-19, or Iran, from this pandemic. What is clear is that the Iranian people remain on the losing side of the pandemic and Iran-US tensions.