After six months of political uncertainty, PM-designate Mustafa al-Kadhimi finally secured parliamentary support to form a government by winning a vote of confidence on Wednesday. 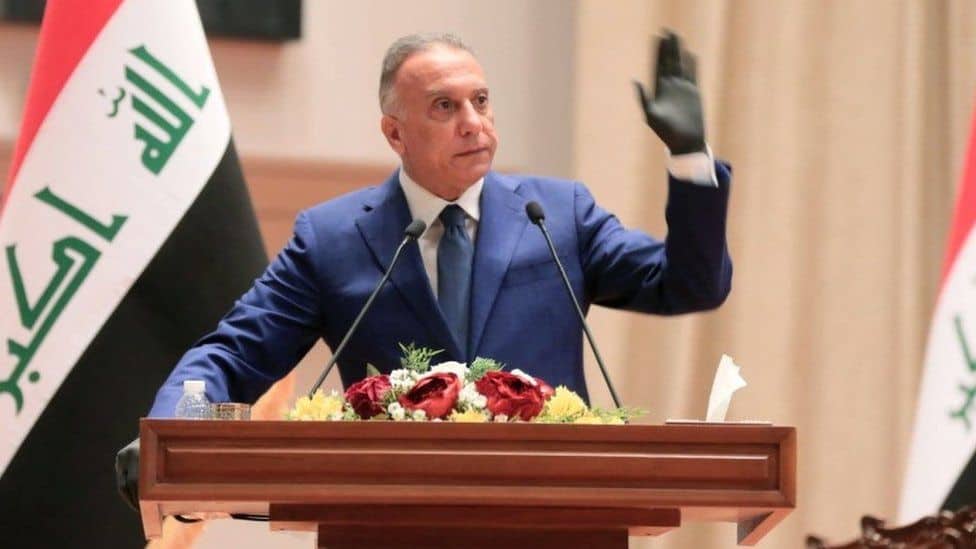 The political squabbling and uncertainty that has marked Iraqi politics for the past six months came to a head yesterday, when parliament approved Kadhimi’s proposed government in a vote of confidence. The political battles are not over as only 15 of Kadhimi’s 22-member proposed cabinet gained a majority of the legislature’s votes.

Two prime minister-designates prior to Kadhimi had tried and failed to form a government. Thanks to an intense last-gasp flurry of deal-making, concessions, and a degree of pragmatism which materialized ahead of Wednesday’s confidence vote, the former intelligence chief and one time journalist is now the new leader of a troubled Iraq.

“We are going through a critical phase in our history. Iraq is facing so many challenges – in our security, economy, healthcare and even socially, but it is not bigger than our determination to stand up to these challenges,” Kadhimi told parliament after the vote, in effectively his first as prime minister.

Wednesday’s confidence vote was close-run, according to Al Jazeera, and Kadhimi will begin governing without his full cabinet after parliament rejected his nominations for the justice, agriculture and trade portfolios. The assembly also agreed to delay the vote on the key foreign and oil ministries, after failing to reach a consensus on candidates for the powerful roles.

Ahead of the vote, the former Iraqi National Intelligence Service chief promised fellow lawmakers his government would be “solution-based, not a crisis government,” adding that early elections will be forthcoming.

Iraq has been mired in political deadlock since widespread anti-establishment protests sparked by socio-economic and political issues forced former Prime Minister Abdul Mahdi’s resignation in November. One of the major issues for protesters was a rejection of Iraq’s opaque power sharing apportionment system “muhasasa,” which they hold responsible for the endemic corruption that has crippled Iraq’s economy and investment in public services.

Khadimi, like his two predecessors Mohammed Tawfiq Allawi and Adnan al-Zurfi, had struggled to find a way forward that would please the various ethno-religious political blocs and the Iraqi people’s desire for change.

US Secretary of State Mike Pompeo also weighed in on Iraq’s political woes at the end of April.

“Iraqi leaders must put aside the sectarian quota system and make compromises that lead to government formation for the good of the Iraqi people, and for the partnership between the United States and Iraq,” he said in a press briefing on April 29.

It appears that Kadhimi was forced to be pragmatic, and allow political factions to effectively pick the majority of his cabinet to enable it to pass. It also seems his new cabinet has done little to end sectarian squabbling, with some parties abstaining from the vote and criticizing it for favoring their Shia rivals.

“He had 10 percent of freedom to choose his cabinet, and 90 percent were determined by the parties and blocs,” according to Iraq commentator Fadel Abu Ragheef.

The National Coalition party led by Iyad Allawi, and ex-Prime Minister Nouri al-Maliki’s State of Law Alliance abstained from the vote because they were not offered ministries. National Coalition MP Kadhim Al Shammery decried the voting process, calling Kadhimi’s approach “strange” and saying it set “a dangerous precedent in the Iraqi political scene.”

“The candidates of his cabinet – that’s 12 ministers – were presented to the Shia parties, and they gave their point of view but it was not shared with the rest of the political parties. It’s as if the Shia powers are the guardians of the political process,” Al Shammery said in an interview with Al Jazeera.

Khadimi faces major internal problems and must also find a way to navigate Iraq’s difficult geopolitical position, which places it in an unenviable position between feuding powers, the US and neighboring Iran.

“The security, stability and blossoming of Iraq is our path,” Kadhimi tweeted after his elevation to the premiership, but that path is paved with a multitude of complex problems.

Domestically, the challenges facing Iraq have escalated dramatically in 2020, driven by COVID-19, a drop in global oil prices, and the political deadlock that Wednesday’s vote ended. Record-low oil revenues have hit the economy hard, while the country’s ill-equipped health system is struggling to deal with a COVID-19 outbreak suspected to be much larger than authorities have reported.

According to Iraq political expert Hisham al-Hashimi, the new PM will have no trouble handing the “technical issues such as forming equitable laws and a fair commission.” It is the lawmakers themselves that will be harder for Kadhimi to handle–-he still needs to find candidates to fill the portfolios of foreign affairs, oil, justice, agriculture, and trade. While seen as a political pragmatist with friends across Iraq’s political divide, Wednesday’s vote showed Kadhimi will still have difficulties finding consensus and common ground in the halls of Iraq’s sectarian parliament.

A small protest in Tahrir Square on Wednesday criticized his new government as a continuation of the status quo and was a reminder that the prime minister will have to work hard to regain the populace’s trust in government or risk a return to last year’s violent protests. Early elections will be paramount but if any failure to deliver the change the Iraqi people crave will complicate the country’s political future.

On the security front, Iraq still faces a threat from ISIS fighters regrouping in the country’s North. It is also caught in the middle of rising tensions and tit-for-tat attacks with the US, often carried out on Iraqi soil. Washing has endorsed Kadhimi and the leader has made overtures to Iran, but balancing the relationships and maintaining Iraqi sovereignty, as he promised the parliament he would, will again be easier said than done.