UN Special envoy has called for Iraqi political leaders to ‘step up to the plate’ and put an end to the political indecisiveness plaguing the country and threatening progress. 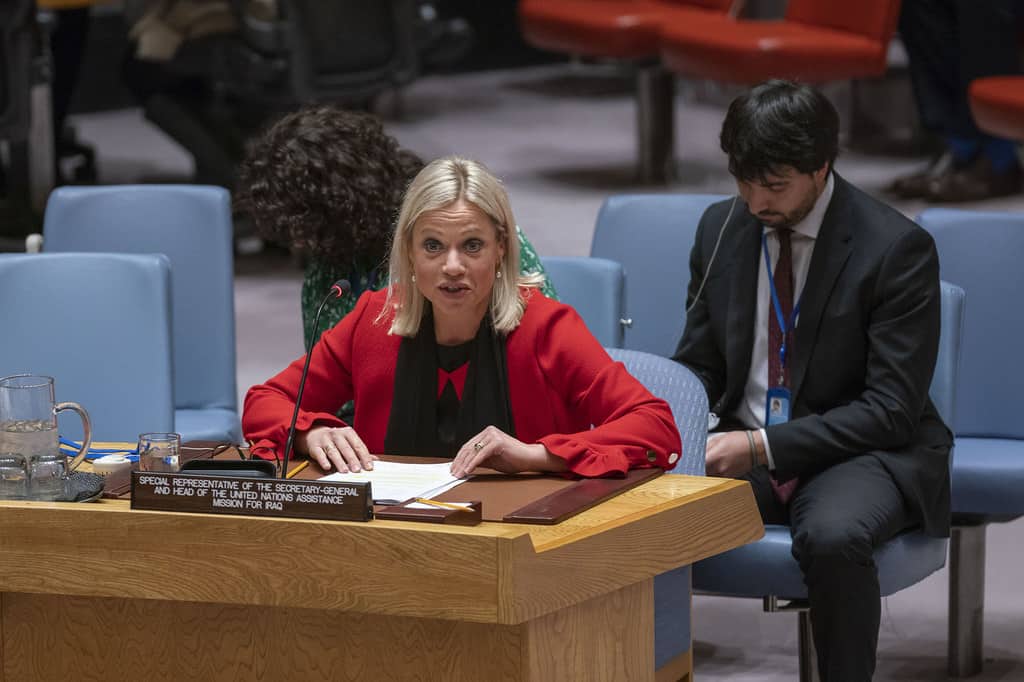 Domestic, regional and international events continue to cause political upheaval and uncertainty in Iraq. The country is again without a Prime Minister-designate, after Mohammed Allawi quit on Monday, having failed to find a cabinet that could break the political deadlock.

In spite of recent events, UN Envoy for Iraq Jeanine Hennis-Plasschaert started her Tuesday address to the UN Security Council on a hopeful note.

“I choose to begin with hope,” she declared.

“The hope of a people who remain united in their determination for a more just and prosperous future, the hope of a nation that refuses to become a battleground for conflicts that are not it’s own and the hope that Iraq may very well find itself at the most opportune moment for genuine and lasting political reform in a generation.”

The UN Envoy quickly turned her attention back to the political situation at hand, a situation she says is pushing Iraq “into the unknown.” The political power-vacuum, mass unrest, and the emergence of COVID-19 in neighboring Iran are all factors driving Iraq towards the abyss.

“I sincerely hope that Iraqi political leaders will recognize in this moment, the crossroads where they either stand idle, or where they place themselves in the service of their countrymen and women,” she told the Security Council.

“I have to say: the critical window of opportunity is closing fast,” she added.

Iraq has experienced five months of protests in Baghdad and the Southern provinces. Hennis-Plasschaert said many Iraqis have “paid an unimaginable price” for taking part in the protests and calling for justice.

Socio-economic challenges such as endemic corruption, poor public services, and high unemployment are at the root of the popular uprising that has killed an estimated 500 people and left thousands injured.

Meanwhile, on the security front, Iraq faces threats from the remaining elements of ISIL, war in neighboring Syria, and being drawn into US-Iran tensions.

In September former-Prime Minister Abdul Mahdi yielded to protesters’ pressure and resigned, but has stayed on in a caretaker role.

President Barham Salih appointed Prime Minister-designate Mohammed Allawi in February but he resigned on Monday after failing to form a government.

Without naming names, Allawi said political parties were to blame for impeding progress towards a new and independent government, and his decision to relinquish the premiership.

He criticized the parties for not being “serious about implementing reforms that they promised to the people” and negotiating “purely for narrow interests.”

Read also: Sudan to Hand Over Ousted President Omar al-Bashir to the ICC

Allawi however, went against tradition by casting-aside the muhasusa system, instead of trying to secretly select a cabinet of independent technocrats. His efforts were thwarted as the government repeatedly failed to achieve a quorum for parliamentary confidence votes.

Political uncertainty has now entered a new phase as Iraqis wait for the President to nominate a replacement Prime Minister-designate sometime in the next fortnight.

The new can candidate will then need to engage political parties in a new round of negotiations and try to build cabinet acceptable to parliament and the angry Iraqi populace.

The new Prime Minister-designate will need to manufacture a level of political cooperation that has been elusive so far, but is badly needed to get Iraq on track to recover after years of war.

“Out of the ongoing political crisis, a fairer, stronger and inherently more resilient Iraq can emerge,” said Hennis-Plasschaert.

“But again, for this to materialize political leaders will have to act fast, placing the country’s interest above all else.”

In a country where government corruption reigns supreme, that level of pragmatism appears unlikely, if not impossible.