Khalifa Haftar pledged to pave the way for building a new civil state as the mercenary-fueled conflict rages on amid the threat of COVID-19. 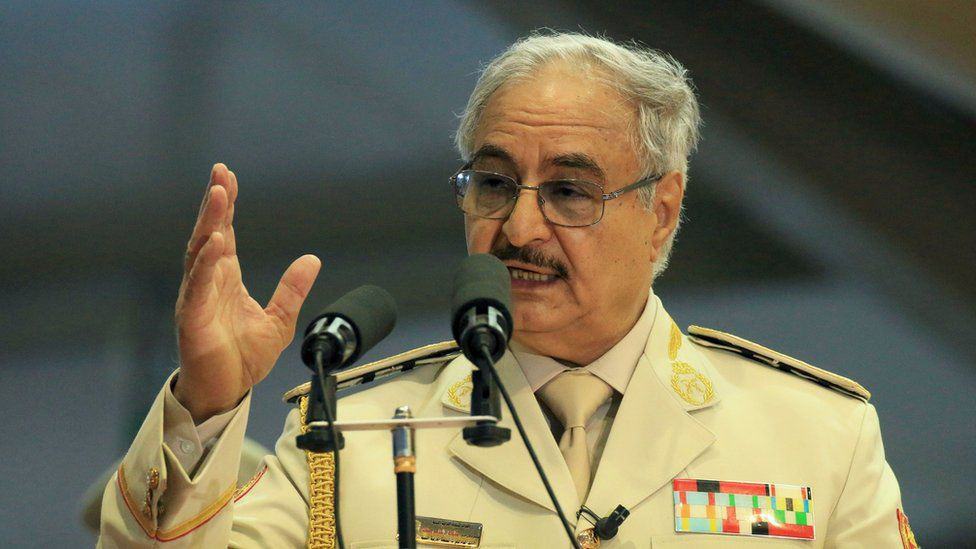 Field Marshal of the Libyan National Army (LNA) Khalifa Haftar today announced: “the dawn of a new Libya” in a speech to the fractured Libyan nation. Haftar said Libya would no longer be interfered with by “colonists”, in a reference to Turkey which is supporting the Tripoli-based Government of National Accord (GNA).

“Today we declare confrontation, accept the challenge, close ranks, reject our differences among us, announce jihad, and comprehensive mobilization, and bear arms, men and women, military and civilian, and prepare with all the strength that we have come to defend our land, and our honor,” Haftar said.

“The decisive battle in Tripoli is nearing victory”, Haftar said, contradicting reports of heavy losses suffered by his coalition in recent weeks. After and intervention by Turkish troops, the balance of power in Libya has changed. Turkish forces supplemented with Syrian mercenaries have prolonged the conflict just as Libya’s people anticipated the fall of Tripoli earlier in the year.

Speaking to his supporters that control the east of the country, Haftar stressed that “the army will triumph over those who have sold honor and lost manhood and boast of giving up the homeland to those who have bored our ancestors for centuries, forgetting our glorious history in the struggle and jihad against the colonists.”

The bloody conflict in Libya rages on with little chance of a resolution and with its people as the main victim. As combatants continue to exchange fire, Haftar appeared confident he could regain the advantage and take Tripoli. Perhaps gauging the country’s fatigue over the conflict that has been fueled by foreign interference and mercenaries, he promised to “end terrorism” in reference to the irregular militias that roam the country.

Haftar took aim at Turkey’s role in supporting Tripoli, saying the war had become “a fierce war in the face of a brutal colonialist who sees Libya as a historical legacy and land without a people.” As Turkey has increased its foreign policy clout in recent years, Syria and Libya have become partly occupied by its troops, with disastrous consequences for the Kurdish people in Syria.

Painting the GNA as a foreign force, Hafter said that “the enemy is gathering its forces today to invade Libya, occupy our land, and enslave our people again,” He decried the coalition that opposes him, backed by Italy, Turkey and Qatar; “It has been found by traitors who sign the agreement of servitude, humiliation, and shame without a popular, constitutional or moral support to tolerate our land and our sky.”

Haftar made sure his comments were clearly aimed at Turkish President Erdogan, under whose leadership Turkey has embarked on its current foreign policy interventions. “The friendly Turkish people with whom the bonds of brotherhood in Islam are bound to rise up in the face of this foolish adventurer who pushes his army to perish and ignites discord between Muslims and the peoples of the entire region to satisfy his whims,” Haftar concluded in a dig at Erdogan.

Haftar’s speech was well-received by his supporters who have had a rough week. Tribal and local councils, civil society organizations, activists, politicians, and parliamentarians reaffirmed their support for the military leader.

As Haftar’s forces suffered losses and lost ground after the long siege of Tripoli, the address clearly shows Haftar has taken a state-building approach to his rhetoric. By addressing Libyans directly and promising an end to local fighting he appears to want to build support for an eventual resolution of the conflict in his favor.

Both sides of the conflict are under increased pressure by the international community to establish a cease-fire to allow COVID-19 measures to be implemented. Since the arrival of Turkish troops and mercenaries, the war has reignited shows little sign of a conclusion. For the war-weary people of Libya little hope remains for the near future.