From Bin Laden videos to a Soleimani-focused podcast, some critics continue to condemn Al Jazeera’s “contradictory” reporting on sensitive issues. 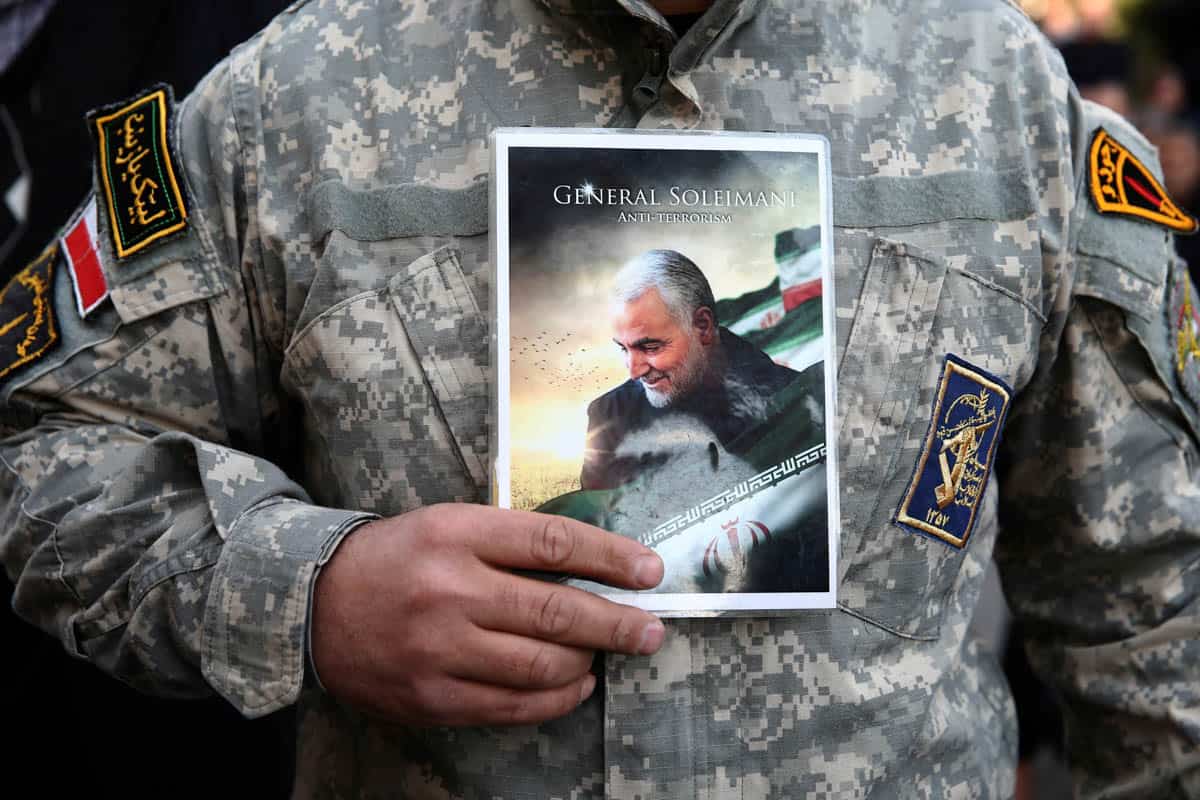 Al Jazeera is no stranger to controversy. Yet, when the Qatari network posted earlier in May a podcast glorifying the late Iranian General Qassem Soleimani, many responded with cries of outrage. Given Soleimani’s role in the Syrian war, the general, along with government forces, faced accusations of crimes against Syrian civilians.

The new controversy recalls previous incidents that led readers to seriously question Al Jazeera’s editorial line. Some critics condemn how the outlet portrayed or became a “propaganda tool” for figures who, just like Soleimani, have blood on their hands.

Turning a ‘criminal’ into a hero

A voiceover, portraying Soleimani in first person, heaped praise on the general who was killed by a US airstrike in early January. The content shocked internet users who denounced Al Jazeera’s choice of words to describe Soleimani.

The podcast elevated the slain Iranian general to a rank usually reserved for such historical Arab leaders as Abdelkader Al Jazairi, Omar El Mokhtar, and Mohamed Ben Abdelkrim El Khattabi: Leaders unanimously hailed as heroes who fought for their countries’ emancipation from colonialism. 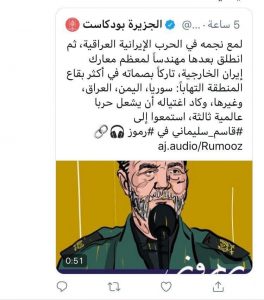 In contrast, Soleimani was a highly divisive figure. While he might be a hero to some, others, especially Syrians opposed to the Assad regime, see him as a criminal.

“I am Qassem Soleimani, the soldier who dedicated his life to serving Islam and the Islamic republic and preserve its glory and dignity,” said “Soleimani” in the podcast.

The narrative went on to describe the late commander of the Iranian Revolutionary Guard’s Al Quds brigade as a “soldier who is leading jihad in the sake of Allah.” The podcast framed him as a military man whose name inspires fear for the US, Israel, and the so-called “agents of the interventionist plan in our region.”

The controversial tribute to Soleimani reached its peak with the following passage: “I praise Allah for cleansing my heart of the love of this worldly life, and granting me my ultimate wish: To die as a martyr for his sake.” 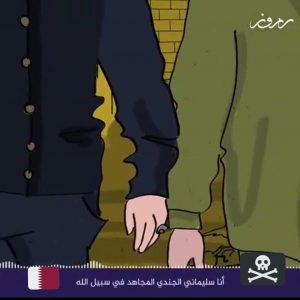 “Frightening and hideous is the scope of glorifying a terrorist and one of the biggest criminals in the region,” protested one Twitter user. “This is an insult to Syrians, Iraqis, Lebanese and Yemenis and a horrifying promotion of the war crimes and killings of children in the name of the arguments advanced by the criminals themselves.”

Faced with the backlash, the news outlet removed the podcast from YouTube and deleted its promotional tweet. Still, the network kept the controversial episode available on its website.

The network has opposed Bashar al-Assad’s regime since the 2011 onset of the Arab Spring. By doing so, Al Jazeera has been faithful to its alleged position as a network that supports and promotes uprisings throughout the region. The network seemed to praise movements which toppled dictators such as Hosni Mubarak in Egypt, Zine El Abidine Ben Ali in Tunisia, Ali Abdullah Saleh in Yemen, and Muammar Gaddafi in Libya.

This editorial line mirrored official Qatari foreign policy, based on backing popular uprisings in the region. Al Jazeera only made exceptions to this pattern when it served Doha’s interests.

One of Al Jazeera’s most prominent anchors, Ghassan Ben Jeddou, resigned in 2011 because the network reportedly had “double-standards” in its coverage of uprisings in Syria and Bahrain.

Qatar still maintained normal relations with Bahrain, potentially explaining why the network did not back the Shia-led protests in the tiny kingdom.

At the same time, Al Jazeera constantly blasted the Assad regime for crimes committed against its own people. The outlet criticized the same regime that Iran and Soleimani intervened to support, thus allowing the regime to continue those crimes. This begs the question: How did Al Jazeera decide to frame Soleimani as a hero?

The only obvious explanation for this contradiction is the fact that the Qatari government, while still opposed to the Assad regime, maintains good relations with Iran.

The Qatari government has the luxury to adopt two seemingly opposed stances as it deems convenient to its interests, but it is difficult to understand why a media organization that presents itself as a “voice for the voiceless” would follow suit.

Conducted by Ahmed Mansour, one the station’s biggest names, viewers found the interview disturbing in both form and substance.

Mansour built his reputation as a fierce interviewer who challenges his guests’ statements, often advancing his own moral views.

This reputation did not hold during his interview with Al Julani. Mansour threw softballs to the leader of a terrorist organization who did not back away from some of his most extreme views, especially regarding religious minorities in Syria.

The interview framed the status of religious minorities in the regions under Al Nusra’s control as something about which “only Western media” were concerned.

“We do not care about what the West says. We apply the sharia of Allah. We do not need the West to tell us what human rights or animal rights are,” Al Julani told Mansour.

It was obvious to viewers that Mansour could challenge Al Julani with some basic arguments: Human rights are universal, religious non-Sunni minorities in Syria are Syrian citizens and have equal rights in their country, and the Syrian uprising started as a reaction to oppression with the hope of building a more democratic government. He did not do so.

In an op-ed for Orient News, Ghassan Yassen described the interview as a “shock” to Syrians, calling it a “lame propaganda film.”

As for Mansour, Yassen said: “The interviewer who conducted his past interviews as if he were an intelligence officer suddenly turned into a lamb in the presence of the emir.”

Critics argued the network turned into a platform that Bin Laden and Al Zawahiri used to spread their extremist messaging and hateful agenda.

“Al Jazeera appears to enjoy the confidence of Bin Laden, who has faxed statements exclusively to Al Jazeera, including one he apparently signed himself,” wrote Warren Richey of the Christian Science Monitor.

The US’ announcement of Bin Laden’s death in May 2011, prompted reflection on how Al Jazeera portrayed the Al Qaeda leader. A six-minute profile summing up his life and legacy strangely disregarded the thousands of people who died in bombings perperated by Al Qaeda and inspired by Bin Laden.

Instead, Al Jazeera presented him only as the man who stood against the US with all its military might. “On September 11, 2001, the US lost a great deal of its fear-inspiring status as the two World Trade Centers crashed to the ground,” said the network’s report.

While many US actions in the MENA region merit condemnation, the path that Bin Laden chose to oppose American interventionism was clearly wrong.

Thousands of innocent civilians lost their lives as a result. This is something that Bin Laden boasted of and that Al Jazeera, unfortunately, chose to ignore.