A report by Syrians for Truth and Justice revealed Turkey has been recruiting child soldiers from Syria to fight in Libya, bolstering GNA forces. 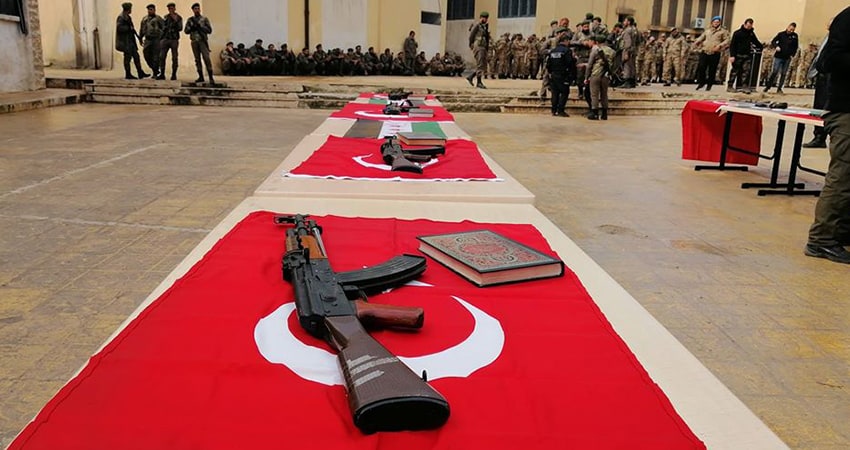 Syrians for Truth and Justice (STJ), a human rights documentation project, released a detailed report on May 11 based on the testimonies of witnesses in Syria and Libya chronicling Turkey’s use of mercenaries in the Libyan civil war.

The 53-page document revealed numerous examples of the Turkish government recruiting Syrians, including vulnerable minors, to fight in support of Libya’s Government of National Accord (GNA).

The Libyan National Army (LNA), led by General Khalifa Hafter, is based in eastern Libya and supported by Egypt, France, and Russia.

Most of the boys are recruited by Syrian National Army members from Turkish-controlled areas of Syria, using easily obtained false identity documents.

“Our investigation revealed that children are issued forged identity documents with false information about their date and place of birth, and are accordingly registered in the personal status records of the National Army,” STJ’s report stated.

Witnesses STJ spoke to in person and via the internet said Syrian teenagers are lured into fighting for Turkish-backed Syrian rebel groups in Libya with promises of cash, cigarettes, food, and housing.

A civilian shop-keeper from the town of Marea, in Turkish-held northern Syria, explained how a Syrian National Army commander stood outside his store, giving cigarettes to children he hoped to recruit.

“The commander prevented anyone from entering the shop, gave the children cigarettes and started talking to them about the financial return they would get, telling them that things will be fine, as going to Libya is easy and they will be able to contact their families and return here after 3 months with a big amount of money,” the shop-keeper said.

The Mu’tasim Division commander told the boys they “will be provided cigarettes, food and housing,” in Libya.

The sales pitch seems to have worked, and the shop-keeper reported three boys between the ages of 15 and16, backed by their families, agreed to go and fight in Libya in exchange for a monthly salary of $3,000.

He added: “I asked one of them if he knew how to use a weapon, and he replied that he would learn all of this in the military camp where he would be with his peers. The camp was set by the Mu’tasim Division, and each group it trained consisted of 25 children, according to what one of the children said.”

“Anyone can get a forged ID with false information easily for a little amount of money, especially in the city of A’zaz,” Al-Haraisi explained.

“Personally, I came across several forged documents containing false information regarding date and place of birth, that had been submitted by boys and girls in order to be allowed for recruitment or marriage,” she said.

On the ground in Libya, an anonymous fighter from the Tripoli-based Sultan Murad Division, loyal to Ankara, said “there are at least five children in my group.” The Syrian militia, made up of ethnic Turkmen fighters, told SJT “it is very clear that they are physically children.”

“Likely, they came here through the armed groups that recruited them,” he added.

The report confirms what many human rights groups and international observers had feared: The Turkish government is taking advantage of poor, displaced Syrian children and using them as cannon fodder for its meddling in the Libyan War.

The opposition LNA has continually published images and videos of what it says are foreign fighters captured or killed in clashes with the GNA and associated Turkish-backed militias.

“A further extended report on the enlistment of Syrians to fight alongside Khalifa Haftar’s forces is to be published soon by the organization,” SJT stated.