Guterres Calls for Unity in “The Fight of a Generation”

The UN Secretary General said collaboration during the present crisis is the “raison d’être of the United Nations itself.” 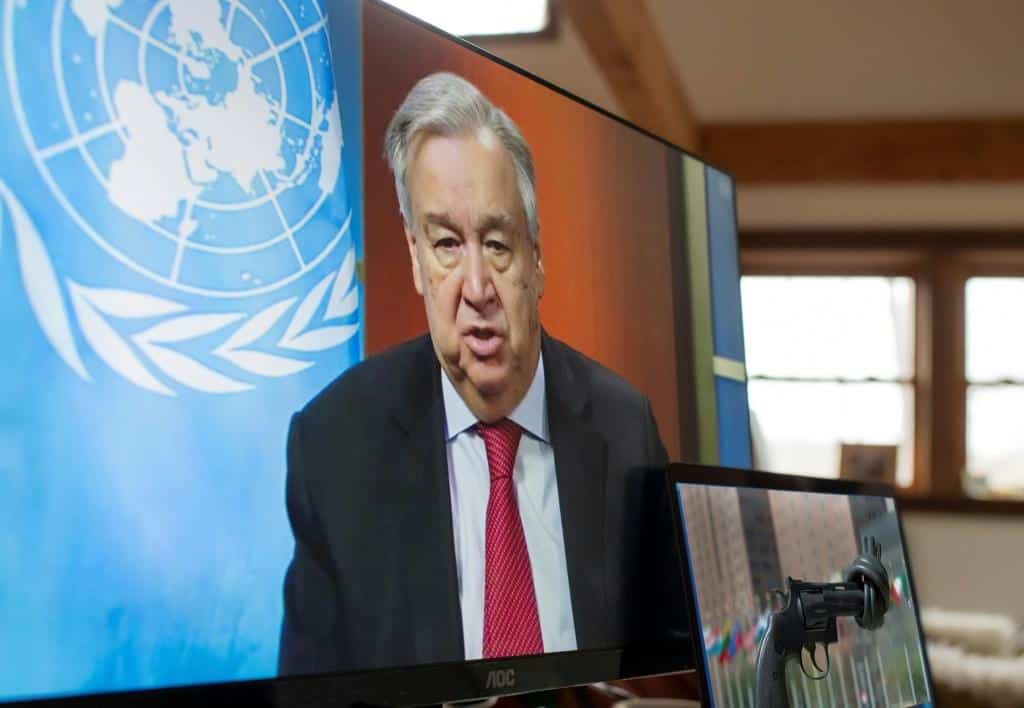 Put ‘unity’ back in the ‘United’ Nations, the UN Secretary General urged the Security Council (UNSC) members present at an April 9 video-conference.

“The engagement of the Security Council will be critical to mitigate the peace and security implications of the COVID-19 pandemic,” Guterres said, as the Security Council remains divided over a united response to the global outbreak. “The world faces its gravest test since the founding of this organization,” the Secretary General began his address.

Germany and nine non-permanent members of the council called for the meeting out of frustration with the lack of a coordinated global response to the pandemic. Germany pitched the meeting as an “international peace and security issue” to fit within the UNSC’s mandate. Russia, China, and South Africa, however, disagreed that the Council had any authority on what they described as “health matters.”

The Secretary General attempted to avoid any such discussion about the Council’s mandate in his speech at the onset of the conference.

“While the COVID-19 pandemic is first and foremost a health crisis, its implications are much more far-reaching,” he said.

Guterres emphasized the holistic nature of the crisis: “We are already seeing its ruinous social and economic impacts, as governments around the world struggle to find the most effective responses to rising unemployment and the economic downturn.”

The UN Security Council is made up of five permanent members, the major nuclear powers China, France, Russia, Great Britain and the US. The council also features ten elected rotating non-permanent members. Currently Belgium, the Dominican Republic, Estonia, Germany, Indonesia, Niger, Saint Vincent and the Grenadines, South Africa, Tunisia and Vietnam make up the non-permanent members of the Council.

The meeting featured two draft resolutions supported by different blocs within the council. The non-permanent members of the council, led by Tunisia, called for a global approach to combat the pandemic through “coordinated and united international action to curb the impact of COVID-19”. France, meanwhile, proposed a “humanitarian pause” to all ongoing military conflicts, with support from the permanent members of the Council, Britain, China, France, Russia and the US.

The issue is highlighting the use of the Security Council by its permanent members to dictate policy to others while being able to retain national sovereignty for the nuclear powers. “This is the reason for the UN to exist,” Guterres said to the council as China and the US continued to argue about the origin of the virus.

The UN General Assembly’s 193 member-states have already unanimously adopted a resolution calling for “cooperation”, but an ambassador to the UN told France24 that the Security Council was “missing in action”.

The Security Council meeting may have been a frustrating affair for Secretary General Guterres. It appeared his appeal had fallen on deaf ears as the world’s most powerful nations showed little willingness for cooperation in any practical way.

Even Guterres’ most basic request was ignored: “The engagement of the Security Council will be critical to mitigate the peace and security implications of the COVID-19 pandemic. Indeed, a signal of unity and resolve from the Council would count for a lot at this anxious time.”