Turkey and Russia are resupplying their forces in the area as victory for either side remains elusive in Libya. 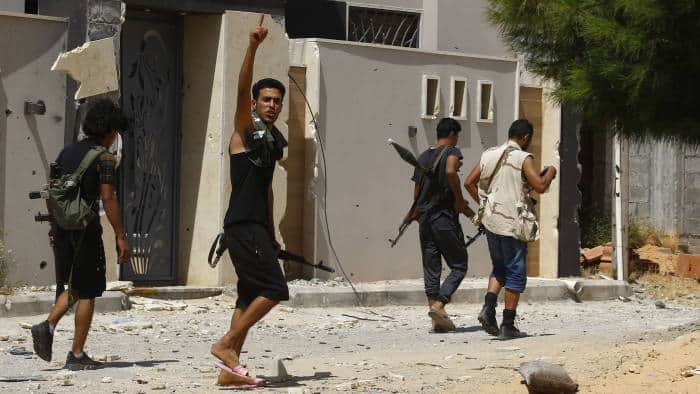 Another  week of heavy fighting has left Libya at an impasse as the two sides appear unable to break the deadlock. April 17 has so far been an eventful day in Libya, as fighting between the UN-backed Government of National Accord and Haftar’s Libyan National Army continues.

Over the last 48-hours, several Turkish c-130 Hercules military planes have been moving south across the Mediterranean sea as planes maneuver into position to refuel for a coming aerial assault.

The morning started with heavy fighting, similar to how previous nights had ended. Over the last few days, GNA airstrikes have targeted Haftar’s Al-Watiyah base in the country’s western provinces. An LNA Drone was shot down in Ain Zara, as Russia shipped more armored personnel carriers to the region.

With Russia and Turkey both sending ships and airplanes to resupply the war effort in the region, no clear winner is materializing. Haftar’s LNA forces failed attempt to take Tripoli has clearly allowed the GNA forces to resupply and plan. Backed by a significant Turkish presence, the GNA has pushed back after months of advances by LNA’s troops.

The Libyan conflict has become a proxy war between the countries that back opposing sides.

Mercenaries make up large swaths of fighting forces and, as the two parties trade blows, little has changed to tilt the balance of power in any specific direction. Meanwhile, Libya’s vital oil industry has come to a stand-still which endangers any prospect of economic recovery.

A proxy-war at an impasse

Ever since Turkey increased its participation in the conflict by supplying the GNA with forces and equipment, Haftar’s march on Tripoli has slowly reversed after weeks of a stand-off in Tripoli’s outer neighborhoods. Now that COVID-19 has reached the conflict zone, a resolution to the conflict has become more urgent than ever.

Bloomberg News speculated that the conflict may lead to a highly unlikely partition of the country. But potential borders between GNA and LNA areas would be unclear, as forces are dispersed on inconclusive front-lines. With little outright support for either side in the conflict, Libya’s population is unlikely to have any say in how the conflict ends.

With some of Haftar’s French strategic advisers caught in the midst of the fighting in western Libya, the only likely definitive outcome in the conflict appears to come from a waning interest by the countries that are supporting both forces.

Turkey’s intervention in the conflict has had a lasting impact, prolonging the war. Turkey’s current national struggle with COVID-19 could result in two outcomes in Libya. Erdogan could withdraw forces in order to allow a chance of a cease-fire as urged by UN Secretary General Antonio Guterres to take place.

It is also likely that Turkey will press on in Libya, desperate for some foreign-policy ‘good news’ to report to its distressed citizens as national news becomes more dire. After initial bravado over a reported lack of COVID-19 cases, Turkey now faces a potential national catastrophe.

In the end it could be that the people of Libya become victims of a reaction to Turkey’s failed internal policies.