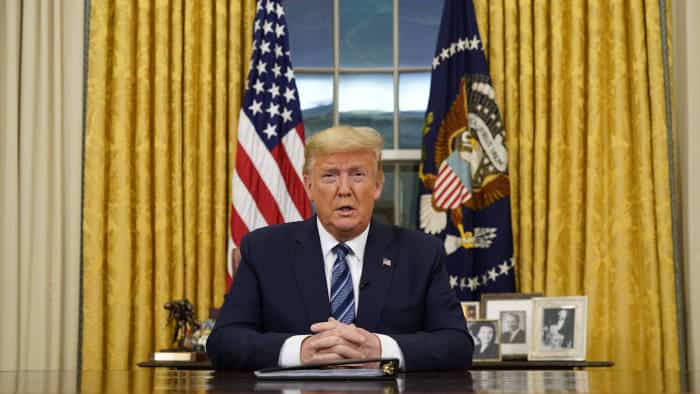 When an American president comes on screen, live from the Oval Office, you can expect those ominous words: “My fellow Americans…”

Commonly used to announce wars or environmental disasters, the eleventh presidential address of the millennium was meant to reassure worried Americans and calm the nerves of global investors.

Bereft of the usual improvisation and off-the-cuff remarks that US President Donald Trump has become known for, the tone was solemn and scripted.

Within 30 seconds, Trump highlighted the global nature of the new coronavirus pandemic and emphasized his administration was “marshaling the full power of the federal power of the national government and private sector,” describing current efforts as “the most aggressive and comprehensive effort to confront a foreign virus in modern history.”

Trump appeared to speak of the virus as a foreign invader, a “threat to our citizens” that can be “ultimately and expeditiously” be “defeated.” Global diseases are a force of nature throughout history, the president continued, “it only matters how you respond.”

After reassuring the public that his often-criticized corona-response was actually done with the greatest “speed and professionalism” by the “best team in the world,” the president listed some of the efforts that had clearly not managed to stop the pandemic from spreading to the US.

In true Trumpian fashion, the president then continued with a dose of ‘whataboutism,’ one of his favorite rhetorical tactics, to emphasize that Europe “failed to take precautions” to restrict travel from “China and other hot-spots,” blaming European travelers for “seeding” new infections in the US.

Trump announced a month-long travel ban on Europe and proceeded to shock markets by stating “these prohibitions will not only apply to the tremendous amount of trade and cargo anything coming from Europe to the US,” which he immediately corrected on Twitter following his speech.

Hoping to get the payroll tax cut approved by both Republicans and Democrats, and please remember, very important for all countries & businesses to know that trade will in no way be affected by the 30-day restriction on travel from Europe. The restriction stops people not goods.

Donald Trump’s address to the Nation was intended to calm moods and reassure Americans that everything was being done to combat the pandemic. Instead, it appears both the public and investors were not impressed.

Tuesday’s mild recovery in stock prices evaporated, as ‘sell’ became the word of the day. The S&P 500 dramatically lost half of all the market gains realized since Trump’s election in November 2016.

Trump’s blame-game and apparent overconfidence clearly shocked markets who had expected the president to announce a national disaster in order to instantly free up $40 billion for emergency response. Trump is reluctant to do so as he fears it might panic the markets, Politico reports.

Trump’s reluctance has revealed itself to be a miscalculation of epic proportions, as the limited scope of Trump’s proposed measures on the national scale was deemed too little, and the total ban on EU travel deemed excessive.

After Wednesday’s tumultuous market activity, European markets similarly reacted with shock and dismay on Thursday, with no recovery in sight as of mid-day.

If markets continue to collapse and oil prices do not pick up, a recession might be at hand. How central banks respond, mixed with developments of the COVID-19 pandemic, should determine economic global outlooks in the near future.