On his first official foreign trip as the new president of Algeria, Abdelmajid Tebboune flew to Saudi Arabia. The visit raises questions about its significance at a time of complex alliances and relations between the countries in the (MENA) region. 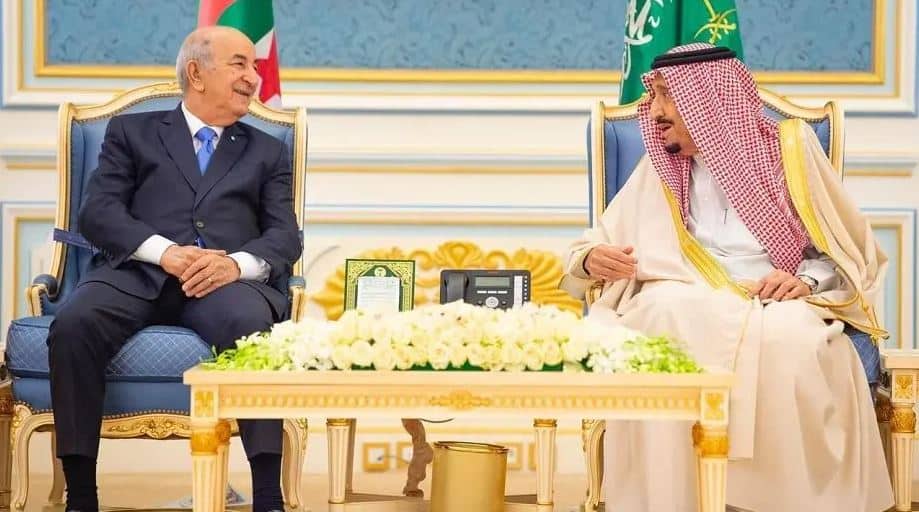 Conventional wisdom has it that the first foreign trip of an Algerian president would be to France, the former colonizing power with which Algeria entertains complex, yet close, diplomatic relations.

A neighboring country such as Tunisia would also be a logical diplomatic choice, in light of the fragile security situation in the region– particularly bearing in mind the situation in Libya, a country that shares borders with both states. Russia, Algeria’s main source of weapons and longtime partner since the Cold War, would have been an easy pick too.

So, when the Algerian presidency announced earlier in February that President Abdelmajid Tebboune, elected to office last December, would pay a visit to Saudi Arabia following an invitation from King Salman the news turned more than a few heads. The announcement prompted media outlets across the region to speculate about the significance of such a choice

The Algerian president’s announcement about Tebboune’s trip was marked by the usual diplomatic language, shedding no light on the motives behind the visit.

“The leaders of the two brotherly countries will examine ways to strengthen bilateral cooperation, coordination, and consultation on issues of common interest,” read the statement.

But, as the Algerian French-language online platform TSA noted, economic considerations could explain the unexpected choice.

‘’Tebboune chose his first destination well. He could have started with other countries such as Tunisia, Turkey or Russia. But he chose Saudi Arabia which chairs the G20 and is a country that is very close to the United States, and a country which can help Algeria economically,’’ reported TSA.

Both Saudi Arabia and Algeria are members of the Organization of the Petroleum Exporting Countries (OPEC) and their economies are dependent on oil and gas exports. Keeping oil prices under control, Capmena think tank founder François-Aissa Touazi explained, is a major concern for both Algiers and Riyadh.

When oil prices fell significantly in 2014, dropping from $100 to $50 per barrel, both countries came to realize they need to end their dependency on oil exports and start diversifying their economies.

Meanwhile, Algeria struggled to come up with a plan of its own despite an official discourse, preached by former president Abdelaziz Bouteflika, describing the diversification of the economy as “central goal” of the Algerian government.

Six years after the 2014 oil price crash, Algeria and Saudi Arabia are still in the same economic boat.

“The slowdown of the Chinese economy and coronavirus crisis, which can heavily affect the oil international market, is causing concerns among oil-producing countries. Saudi Arabia plays an important role in the oil market and the two countries have to coordinate their actions inside OPEC to avoid any significant drop in the price of the barrel,” said Touazi.

In Search of Political Understanding

While Saudi Arabia and Algeria do have some shared economic concerns and interests, on a political level the two countries generally do not see eye to eye.

Historically they were in two opposing camps. Algeria was a socialist country that shared Egyptian leader Gamal Abdel Nasser’s idea that royal regimes in the region, including that of Saudi Arabia, were regressive and should be overthrown.

For decades Saudi Arabia has been a close ally of Morocco, Algeria’s sworn enemy. In the Western Sahara issue, Riyadh has always backed Morocco’s sovereignty over the territory, while Algeria is the main backer and sponsor of the Polisario Front, the armed movement seeking independence for  Western Sahara.

Regionally, Algeria has always had very good relations with Iran which Saudi Arabia sees as its enemy number 1. Furthermore, Algiers does not also share Riyadh’s animosity towards the Bashar Assad regime in Syria.

Tebboune, in fact, reiterated his country’s call for Syria to rejoin the Arab League during an interview with RT Arabic, calling suspending Syria’s membership in the organization “a big loss.”

“Algeria remains faithful to its diplomatic principles. We do not accept that an Arab country or people are exposed to any harm. Syria is a founding member of the Arab League,” he said.

“Saudi Arabia is expected to organize an African-Arab summit in mid-March in Riyadh and hopes to show that it is determined to strengthen its relations with African countries,” said Touazi.

“For his part, the Algerian president has clearly expressed new ambitions for Africa and is hoping that Algeria makes a come back in full force to Africa where it possesses several assets. The two countries can eventually explore new axes of cooperation and collaboration in this area,” said Touazi.

While the timing and choice of Tebboune’s visit to Riyadh suggest relations between the two countries have the potential of becoming stronger than before, the differences in political opinions that have long marked Saudi-Algerian relations are set to continue.

Algeria will remain faithful to Iran, reflecting the long term friendship between the two states. Meanwhile, Saudi Arabia is unlikely to turn its back on Morocco in the Western Sahara issue, despite past tension between Riyadh and Rabat over Morocco’s neutral position in the crisis between Saudi Arabia and Qatar.

Morocco could also prove to be more beneficial to Saudi Arabia in its African aspirations, having been more economically active in recent years, with investments spread out in the continent.

As for Algeria’s hopes that the wealthy kingdom will help it navigate its economic recession since the fall of oil prices six years ago, it remains to be seen whether Tebboune has bet on the right horse.