With the controversial sect in the news again, Arabia Policy is taking a look at the origins of the group. 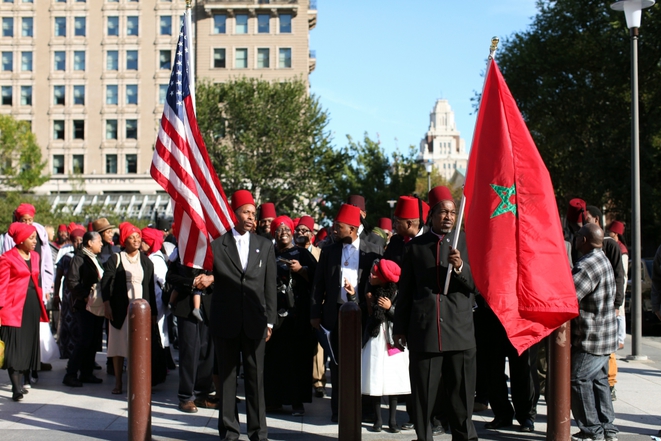 Last week, members of the Moorish Science Temple of America were once again in the news as they joined protests in the United States, marching against systemic racism and the murder of George Floyd.

The group, identifiable by their bright Tarboosh (fez hats) and the large Moroccan flags they carry, has a complex history.

Founded by a “prophet”

Formed in 1913, followers of the Moorish Science Temple of America claim to be followers of Islam and pledge allegiance to Morocco and the Moroccan King based on a supposed Moorish heritage.

Referred to by members of the temple as a prophet, the founder, Noble Drew Ali, was a well known and influential figure in Chicago society in the 1920s. In line with Temple’s teachings, which continue to allow polygamy, he had multiple wives.

Despite his popularity at the time, rumors persist that he was murdered by the police.

The Moorish Science Temple of America in 2020

Today, there are approximately 60,000 members of the sect which counts a reported 90 temples across 15 states in the US.

Followers use a version of the Quran that includes Bible verses and additional sections written by Noble Drew Ali. Drew Ali claimed to receive “divine revelations” following a visit with a priest in Egypt. These revelations form part of the manuscript used for worship and religious ceremonies.

Followers of the sect embrace their “Moorish identity” through the addition of “El” or “Bey” to their surname. Male members wear the bright red hats, known as a Tarboosh or Fez, and women wear a turban-style head covering. The group’s temples are structurally similar to Moroccan mosques.

Central to claims of a Moorish heritage by members of the temple is the belief that African-Americans are denied access to their true heritage and are all descended from Moors.

The term Moor is traditionally used to describe the Muslim inhabitants of North Africa and the Iberian Peninsula, as well as Malta and Sicily, during the Middle Ages.

The origins of claims to a Moorish history are difficult to trace. One theory is that they take inspiration from an episode in 1790 when eight slaves taken from Morocco presented a petition demanding their liberty to the Chamber of Representatives in South Carolina.

The petition for freedom was based on a treaty signed by Moroccan Sultan Mohammed III in 1777 with the United States. The treaty guaranteed Moroccans citizens in America their liberty. Following the presentation of the petition by the slaves, who claimed to have been kidnapped by the Portuguese and transported to America illegally, South Carolina passed the Moors Sundry Act of 1790. This act enshrined in law the right of Moroccans to live as “free men.”

Some have also suggested that in addition to the episode in 1790, the belief in a Moorish heritage grew from the desire of members to disassociate themselves with the label “black” in the segregationist US of the 1920s.

To this day, the vast majority of the sect’s members are not Moroccan citizens, although some regularly travel to Morocco to connect with their “ancestral homeland.”

Now in its fourth year, the Middle East Games Con is the GCC’s largest gaming event. In previous years YouTube personalities including MatPat, Ali-A, and Miniminter have attended the event. Ticket holders were allowed a front row seat to official e-sports tournaments, trialling untested games, and participating in cosplay competitions.  Scheduled for October 29-31, this […]