Authorities prioritized workers’ safety by distributing masks and gloves for free, in addition to sterilizing places of work. 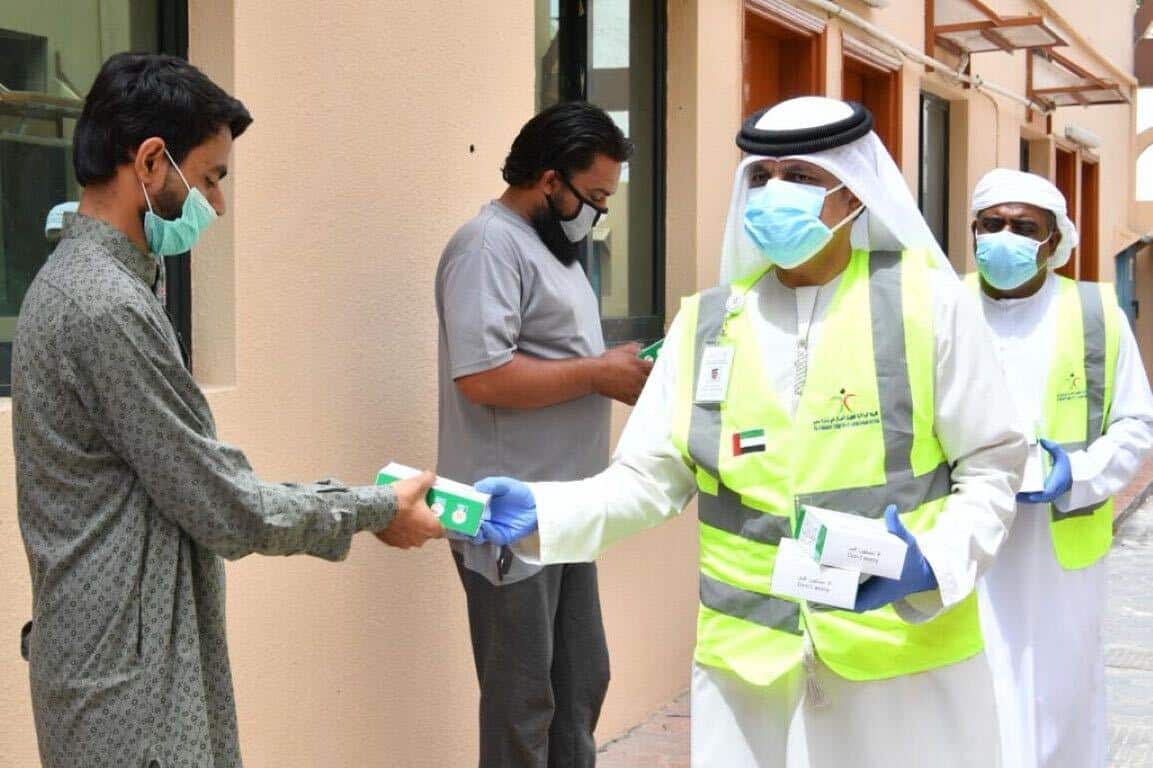 Following the outbreak of COVID-19 in the United Arab Emirates (UAE), the government implemented a country-wide lockdown. The preventative measures, however, led to the loss of livelihood for thousands of foreign workers.

The Emirati government took labor rights and the well-being of its citizens, residents, and tourists into consideration in the execution of the emergency response plan.

On January 29, 2020, the UAE became the first Middle Eastern country to report a case of COVID-19 after an elderly Chinese woman who had traveled from Wuhan tested positive for the virus.

As the situation developed throughout the second half of March, UAE authorities imposed a curfew from 10 p.m. to 6 a.m. and suspended intercity movement. Within the lockdown measures, a permit is required to leave the house for the purchase of essential goods.

The COVID-19 crisis did not spare the Emirati economy. In response to the economic shock caused by the pandemic, the government has shown its readiness to support workers and mitigate the shutdown’s impact on their livelihoods.

The UAE’s efficient response to the epidemiological and humanitarian crisis positions the country as a regional leader in terms of workers’ rights and welfare.

On Wednesday, May 13, Sheikh Mohamed bin Zayed, Crown Prince of Abu Dhabi,  ordered free COVID-19 screening tests for all UAE citizens and for domestic workers, said the Ministry of Health and Prevention (MOHAP) and the National Emergency Crisis and Disaster Management Authority (NCEMA) in a joint statement.

The government pledged to maintain payments of workers’ monthly wages amid the crisis, including for workers who have tested positive for COVID-19. Foreign nationals have been granted the right to take early or temporary leave amid the pandemic, giving them the opportunity to return to their home country where possible.

The Ministry of Human Resources and Emiratisation (MoHRE) clarified that the rights of workers diagnosed with an illness that prevents them from working are protected within UAE law. The statement warned that it would address any breaches of workers’ rights.

To ensure the adherence to the preventative measures set by the World Health Organization (WHO), authorities implemented a business continuity system. The system allows 30% of workers to continue operations in one facility at a given time, while respecting social and physical distancing measures.

The MoHRE said it has conducted 560 inspection visits to monitor the private sector’s compliance with COVID-19 precautionary measures.

Authorities launched the 24-hour National Sterilisation Programme on April 4 to disinfect public transportation and public facilities. Workers’ housing units are also part of the national hygiene program. The state continues to raise awareness on the necessity of practicing precautionary measures at work and at home.

Authorities did not neglect the pandemic’s psychological impact on the workers. As fear and anxiety reduce the body’s ability to overcome the virus, the state launched a well-being strategy to ease people’s fears by offering particular solace to elderly people and those in quarantine.

A group of 50 experts executed the campaign by organizing podcasts to raise awareness. Content focused on healthy practices to increase the body’s immunity.

As Ramadan is the month of solidarity initiatives, the Khalifa bin Zayed Al Nahyan Foundation launched a project to distribute 4.5 million meals to workers in industrial areas in Abu Dhabi, Al Ain, and Al Dhafra.

To underline the vital role of workers in the nation’s economy, the UAE celebrated International Workers’ Day by featuring workers’ role in the country’s development in all national media outlets.

The stamp is sold at AED 19 ($5.17) on the Emirates Post website. The postal service will donate part of the monthly proceeds from the stamps to Emirates Red Crescent to support workers and low-income families. Postal service workers will receive the remainder of the proceeds.

Regarding physical health, the UAE established medical centers in industrial areas such as Mussafah and provided free medical checks, masks, and gloves for workers.

As part of the national program to cushion the economic shock from the pandemic, the UAE has equipped mobile clinics to run screening tests on workers in their residential areas.

In order to ensure workers and foreign nationals are aware of restrictions and curfew measures, the state is sending text messages to workers in all languages.

To ease the growing stress resulting from continued work and confinement, the UAE granted free Wi-Fi access in workers’ complexes, offered free television screens to workers in residential areas, and provided free entertainment applications, such as Switch TV, for movie and series streaming.

As part of the initiatives to ease stress, sports activities and other recreational opportunities are running in workers’ complexes, while participants maintain safe distances.

The UAE’s particular care for foreign workers enabled it to lead the Gulf region in terms of efforts to support workers during the time of crisis.