Indian Muslims are facing hate speech and acts of vigilante justice as mobs accuse them of ‘corona jihad.’ 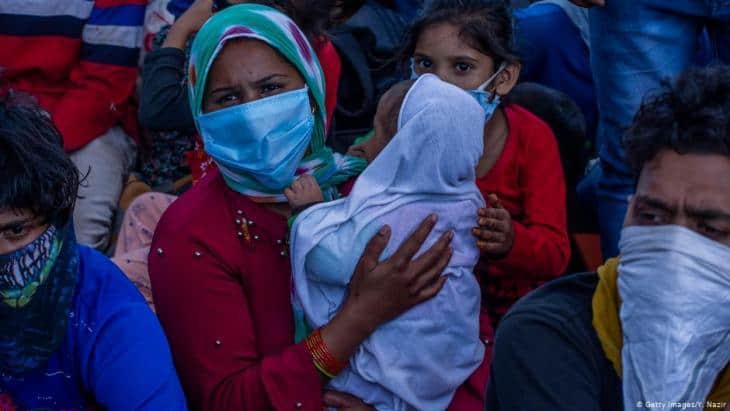 What might seem like a harmless report on public health issues to an outsider is actually emblematic of the way Indian nationalists are framing COVID-19 as a uniquely Muslim problem, or even a purposeful conspiracy against the country’s Hindu majority.

“This is not journalism, this is hate-mongering,” activist Kavita Krishnan responded in a statement decrying the India Today show. “You belong in the dustbin of Journalism,” she told the television show’s producers. “History will judge you and it will judge each of your colleagues that remain silent on this,” Krishnan stressed as she called out the channel and its employees for producing material meant to incite religious hatred.

The activist summarized the crisis at hand: “This is absolutely shameful, that you should divide those victims of COVID-19 based on religion.”

Krishnan’s commentary highlighted the tensions between India’s majority Hindu population and its Muslim minority. Television and newspapers regularly use racist dog-whistles, employing subtle racist tropes to fuel resentment without being explicitly offensive. The India Today show did so by framing Muslims as backwards, conspiratorial, and lax about national priorities and laws.

What might shock outsiders even more is Kavita Krishnan’s assessment that this anti-Muslim propaganda is not produced despite government oversight, but rather to appease government officials. Krishnan accused India Today of “Grinding a communal axe during a pandemic in order to serve this government.”

Anti-Islamic resentment has flared since the election of Indian Prime Minister Narendra Modi, a Hindu Nationalist of the Bharatiya Janata Party (BJP) who has been lauded in Western media as an economic reformer. Modi’s government has revived tensions lingering from Britain’s partition of India. During the partition, entire religious populations were violently displaced, with Muslims forced towards Pakistan and Hindus forced to India.

India’s formation was explicitly secular and for decades inter-religious violence was limited to local tensions and the conflict in Kashmir. Then, Modi proclaimed India as a Hindu state. “Hindudva,” as Hindu-nationalism is called in India, originated in 1923 and gave rise to the RSS, a paramilitary Hindu group with 6 million members. This group is now a powerful force in Indian politics with its official membership counting former prime ministers and senior national officials.

The RSS sparked the rise of growing violence against the Muslim minority in 1992 when it demolished a historic 16-century mosque. Modi’s BJP party today relies heavily on the RSS to bring out voters and for political mobilization, which in turn gives the RSS disproportionate influence over the BJP government. Narendra Modi himself has attended RSS events since the age of 8, formally joining the group at age 20.

The RSS and BJP have actively engaged in inciting resentment against India’s 201 million Muslims and are now “capitalizing” on the COVID-19 pandemic to fuel the flames of inter-religious hatred. Indian media connect the word “jihad” with any issues deemed problematic in the Islamic community, and #coronajihad went viral after an Islamic conference in Delhi led to COVID-19 infections in the country.

Since the transmissions at the conference, mobs of Indian nationalists have attacked Muslims on the streets and fake memes and bigoted messages have spread through India like a virus unto itself. New and old videos from around the world are used as “evidence” that Muslims are actively trying to spread the virus as part of a deliberate and coordinated “corona jihad.”

While a large number of religious gatherings in India continued even as warnings against the virus proliferated, specific Islamic gatherings have been framed as the source of the outbreak. This has further inflamed pre-existing resentment against Indian Muslims.

Islamophobia has become a political tactic in India. As public officials and mainstream news sources continue to issue divisive propaganda, both Muslim and Hindu Indians are increasing their chances of infection as mobs gather to exact vigilante justice. Misunderstanding the threat of the virus will lead to more infections across religious demographics.

The COVID-19 virus will undoubtedly leave a lasting scar on India, but as religious tensions increase, the virus might not be the largest threat on the Indian subcontinent.