Artists have an important role to play in documenting the country's health and security crises. 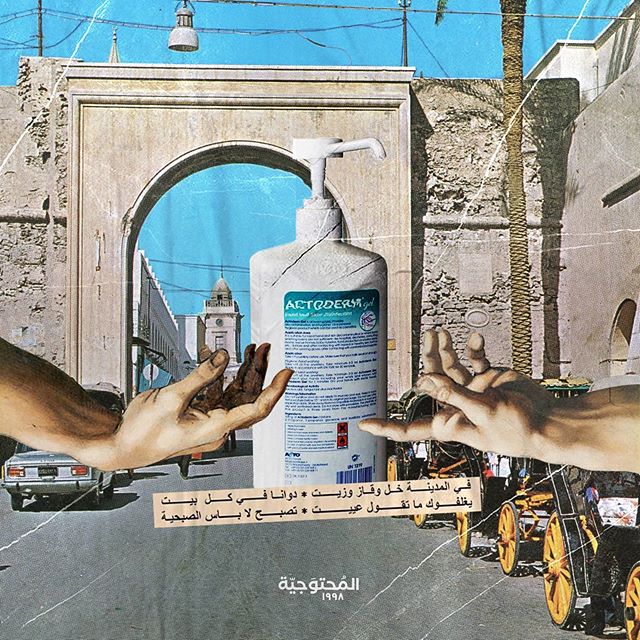 Libyan digital artist Razan Al Naas (@razangryffindor) weaves the country’s culture and history into digital collages that provoke thought and awe. A large part of that history in recent times has been the instability and conflict that has ravaged the country since the overthrow of longtime dictator Muammar Qaddafi in 2011.

The increase in fighting since April 2019 upended Tripoli resident Al Naas’ life with her family moving away from their home to escape the constant bombings. The arrival of coronavirus has further interrupted life in the city, closing universities and schools to contain its spread.

The turmoil of life in Libya is a constant feature of the art produced by many contemporary Libyan artists. Earlier this year, Al Naas repurposed Michaelangelo’s hand of God to show two hands reaching out under a large bottle of hand sanitizer. In the background is Tripoli’s Bab Al Madina.

The image evokes feelings of hope and hopelessness with the hands ever so close to touching, as in the original, and the hand sanitizer a stark reminder of both the challenges of COVID-19 and the impossibility for many to hold their loved ones at this time.

For Al Naas coronavirus and the associated restrictions to daily life in Libya cannot be disentangled from the war, with the artist telling Arab News in April “In Tripoli, you can’t spell quarantine without war.”

Other works by Al Naas, the majority of which are published on her Instagram, feature dilapidated buildings and faceless soldiers as she continues to document her experiences as a young person living through war.

Artists, writers, photographers and poets play a vital role in curating cultural and collective memories of the human experience. The importance of this contribution in Libya was highlighted in a 2017 art show hosted by the WaraQ Art Foundation in the capital.

At the time, the country’s art scene was beginning to recover after years of conflict, with the exhibition drawing large crowds throughout its five night run. The scars of war were visible throughout the work featured with themes such as the trauma of Islamic State’s barbarism and the impact of the war on children prominent among the art on show.

Al Naas was among the artists to exhibit in 2017. Her contribution included the piece  “Kidnapped and yet to return.” Drawing on her family’s personal trauma the piece references the kidnapping of her grandfather. The elderly man was held for over a month until the family was able to pay his ransom.

Al Naas wants the piece to serve as a warning to others, saying “I wanted to share this feeling with everyone. The fact that you could wake up one day to find one of your closest people is kidnapped.”

Earlier this year, the Tajarrod Art and Architecture Foundation held a three day open air exhibition in Benghazi. Visitors walked among red pillars viewing art produced by young people produced on the exhibitions thematic of building meaning out of destruction.

Whilst COVID-19 has curtailed plans for more exhibitions in the short term and the ongoing conflict makes long term planning difficult, the enthusiasm surrounding art across Libya is an encouraging sign for the industry’s future.