As part of its Vision 2030 plan to open itself to the world and improve its international image, Saudi Arabia is using clever public diplomacy and ignorant influencers. 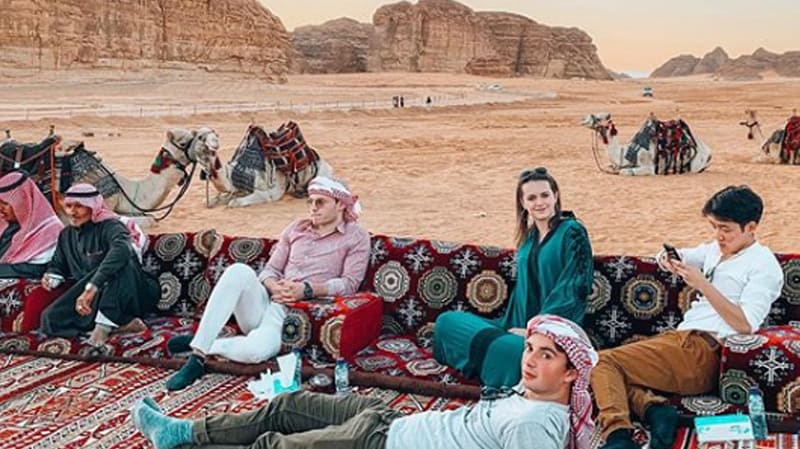 How do you convince the world you are an open and tolerant country in the 21st century? Instagram of course, and visas. Most governments are doing it, and it is only natural that Saudi Arabia is jumping on the “tourism as openness” bandwagon to curate its image and score big on international reputation rankings.

But the trouble with the Gulf kingdom’s impressive public relations campaign is the notoriously grim socio-political realities underpinning it.

Increasingly, Saudi Arabia’s latest public diplomacy efforts have been singled out for taking place against a backdrop of human rights abuses, the most notable of which has been, the murder of journalist Jamal Khashoggi.

Public diplomacy uses various channels and mediums (education, sport, cultural projects, etc.) to share messages about a country’s values, ideas, and culture in an attempt to make it more attractive to foreign audiences.

The goal is to extend soft power, or a country’s non-coercive power to attract and influence. So why is Saudi Arabia drawing so much attention when governments around the world are using social media and expensive public relations campaigns to extend their soft power?

The MDL Beast music festival in Riyadh in December 2019 for one, bought things to a head when debate erupted on social media over the ethics of influencers agreeing to promote the kingdom.

They were quickly called out by followers, journalists, academics and influencer peers, including models Teddy Quinlivan and Emily Ratajkowski, for unashamedly celebrating Saudi Arabia as an open and tolerant country. Podcast host and writer Aminatou Sow decried the “shameless” influencer culture on Twitter, while Instagram users peppered comment sections with questions like “how much are you getting paid to rebrand Saudi Arabia?”.

In a statement to Buzzfeed News, model Teddy Quinlivan was scathing. “Our platforms bring validity to what we promote and they reach massive audiences,” she said. “It’s clear that along with social media becoming a tool for propaganda, influencers are being weaponized as well.”

In October 2019, Saudi Arabia opened up tourist visas to US, European, and UK citizens, expanding eligibility beyond an initial list of 49 countries. It then announced unmarried foreign men and women would be allowed to share hotel rooms. Just prior, positive images and stories about the Kingdom flooded Instagram.

According to investigations by the Guardian in 2018 and 2019, Saudi Arabia has recruited a raft of influencers, public relations, and communications companies to work on campaigns.

The investigations exposed the names of some of the influencers, public relations and communications companies Saudi Arabia has engaged to work on expensive campaigns to create a positive international image for the kingdom. Public relations agency Freud’s and Consulum, British newspaper the Independent, American broadcasting company Vice Media and the Tony Blair Institute for Global Change are among those with links.

“London has become a hub for global Saudi public relations and media influence campaigns, with British firms earning millions of pounds from efforts to improve the image of the kingdom and its regional allies in recent years,” the Guardian’s investigation found in 2018.

Dr. Raihan Ismail, an associate lecturer at the center for Arab and Islamic studies at the Australian National University (ANU), agrees. He argued that Saudi Arabia has already invested billions of dollars to burnish its image in the West.

“The Saudi government is investing so much in trying to reconstruct its image, particularly after the assassination of Jamal Khashoggi,” says Ismail. “I think that’s when people started to realize that we’re dealing with an authoritarian regime. We’re dealing with a state that is so repressive.”

Saudi Arabia uses NGO Gateway KSA, to offer all-expenses-paid, supervised trips to social media personalities. “We’re looking for the influencers, policymakers, and leaders of tomorrow. Young men and women who can see beyond today’s headlines and tweets to imagine and shape a future of openness, collaboration and innovation together,” Gateway KSA’s sleek, modern website reads.

Yet, Dutch-Australian founder of Gateway KSA, Nelleke Van Zandvoort-Quipsel claims none of these sensitive topics are off limit during sponsored trips. “All the Saudis they meet are willing to talk about their views candidly and openly,” she says. “It’s real people, sharing real experiences, and from that they can judge and form their own opinion. We don’t guide them in how or what to think, whether positively or negatively.”

As of October 2019, Gateway KSA hosted 19 influencer trips to Saudi Arabia. Meanwhile, the Saudi Tourism Board has also hosted an unknown number of paid visits. The influx of influencers fawning over Saudi Arabia hasn’t gone unnoticed by social media users, however.

Australian photographer and Instagrammer Gab Scanu @gabscanu, for example, received backlash from his 365 000 followers for a 2018 Gateway KSA video collaboration. Like many of his counterparts, Scanu hit back, arguing the trip was accepted on artistic, not political grounds.

Scanu retorted: “I don’t agree with ‘influencers’ traveling there and commenting on issues they’re not educated in. It’s definitely not what the media makes it out to be. I think there are a lot of improvements to be made for sure but I never felt unsafe or in danger while there.”

But the Saudi political landscape has witnessed some recent improvements, even if the changes made so far remain largely cosmetic compared to the persisting challenges. On women’s rights, for instance, Crown Prince Mohammed bin Salman has relaxed some gendered prohibitions, including the driving ban and male guardianship system controlling women’s travel. However, female activists and dissidents continue to be arrested and detained.

“Reforms for Saudi women do not whitewash the rampant harassment and detention of Saudi activists and intellectuals, including women’s rights activists, who simply expressed their views publicly or privately,” said Michael Page, deputy Middle East director at Human Rights Watch. “If Saudi Arabia has any hope of rehabilitating its tattered image, the authorities should immediately release everyone they’ve locked away merely for their peaceful criticism.”

For her part, ANU’s Dr. Raihan Ismail warns influencers against legitimizing Saudi Arabia’s public relations campaign, insisting that Instagrammers should not be wooed into thinking Saudi Arabia has changed or liberalized.  She also urges them to consider the ethics of working with the regime. “Sometimes you have to pick a stand,” she said. “The standard you walk past is the standard you accept. If you see a country violating human rights, do you turn a blind eye or do you take a stand?”

As it happens, the challenge for influencers and celebrities remains: Can they agree to promote Saudi Arabia in spite of documented human rights abuses, and will their followers continue to unquestioningly consume such content? It also remains to be seen whether the Kingdom’s public diplomacy campaign’s clever use of influencers will rehabilitate its international image, delivering the soft power it so desperately craves.