The Governor of Mecca has called for young rapper Asayel Slay’s arrest. Racism and misogyny reign on Twitter, after her song praising the city's ‘powerful and beautiful’ girls, went viral. 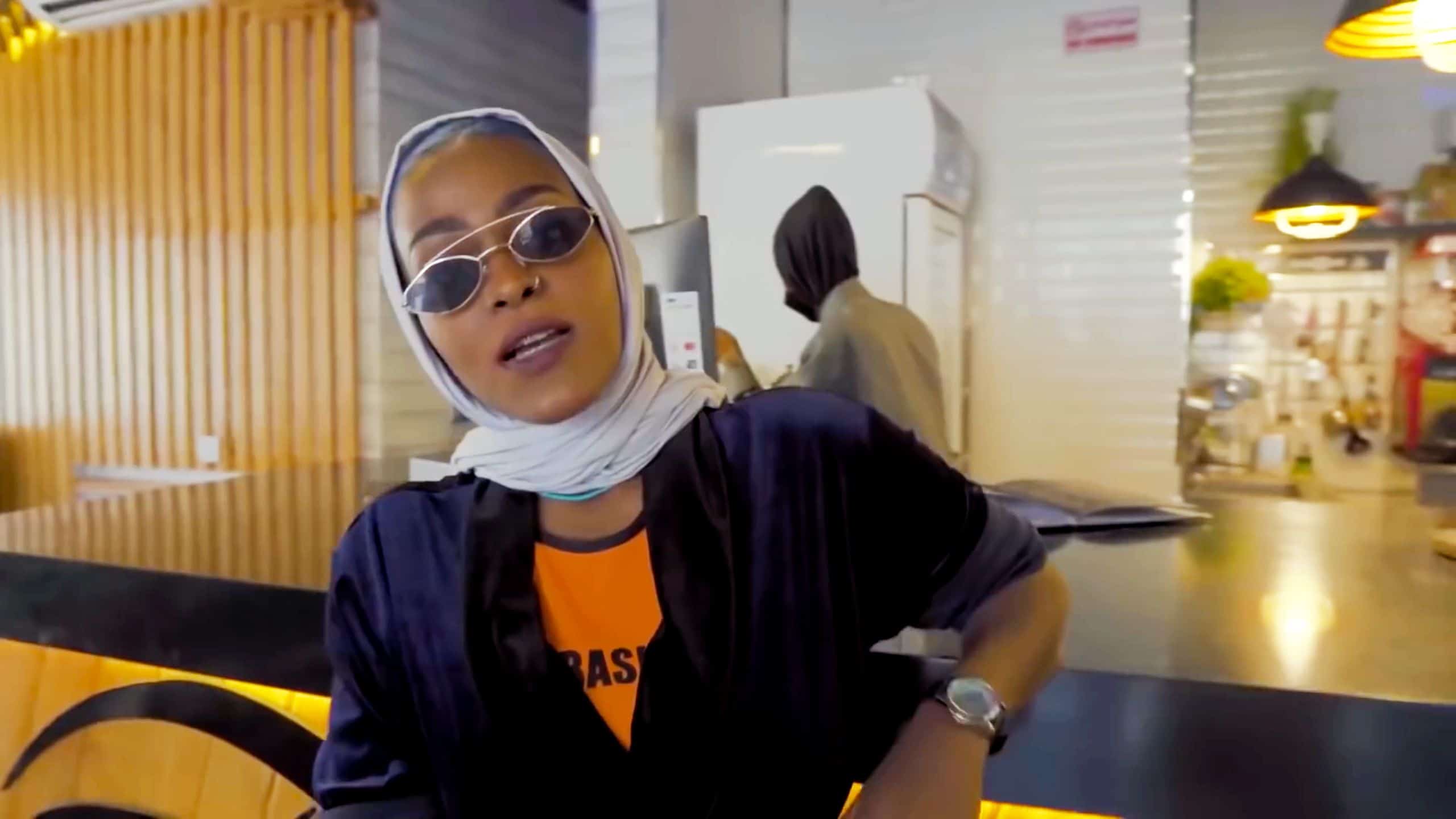 Asayel Slay, a female rapper of Eritrean origin, recently released a song and music video called ‘Bint Mecca,’ or Mecca Girl, singing the praises of the holy city’s women, who she says are like “sugar candy”.

In the clip, Asayel moves around the trendy cafe in a hijab and loose-fitting outfit, and raps in Arabic, as enthusiastic young back-up dancers break-it down behind her. She sips on fresh juice and spits bars extolling Mecca girls’ many virtues.

Following a well-known rap tradition, Asayel expresses pride in her home town signing, “Our respect to other girls but the Mecca girl is sugar candy.”

“A Mecca girl is all you need/Don’t upset her, she will hurt you.”

“With her, you can complete the Sunna [get married]/Your life with her will become Paradise,” she boasts

Asayel uploaded the video to her youtube channel and it was shared widely, receiving over 1.6 million views before it was removed.

Unfortunately, a young black woman rapping about women from Islam’s holiest site angered some users, leading to Asayel’s account also being suspended. The video continues to circulate on other channels and platforms.

Asayel’s lyrics are a far cry from the highly-sexualized, obscenity-laden bars in most rap songs. “Bint Mecca” does not include a single obscenity, reference to drug use, nudity, insults, or even references to smoking.

Asayel Slay’s song also drew the ire of Mecca’s governor. On February 20, local authorities in Mecca called for Asayel and anyone involved in producing the clip to be arrested in a tweet on the @mekkahregion account.

“Prince Khalid bin Faisal of Mecca has ordered the arrest of those responsible for the Bint Mecca rap song, which offends the customs and traditions of the people of Mecca and contradicts the identity and traditions of its esteemed population,” the tweet said.

It also included the hashtag #You_Are_Not_Mecca’s_Girls, sparking a heated debate on Twitter. The social media platform was quickly overrun with disparaging tweets, many openly racist, saying foreigners must respect local customs, that Asayel should be deported, and that her words and video do not represent Mecca’s women.

Prominent thinkers like liberal Muslim feminist Mona Eltahawy, using the hashtag #Mecca_Girl_Represents_Me condemned the Saudi regime’s hypocrisy and “the anti-Black racism and misogyny’ Asayel has been subjected to.

Sydney-based Saudi activist known as ‘Ms. Saffaa’ jumped to Asayel’s defense tweeting “I am from Makkah & the only thing I find offensive is ur racism, misogyny, and ur war on a young woman & her artistic expression of her culture & her people. #لستن_بنات_مكة”

“This is so typical of the Saudi government to do – bring western influencers to artwash the regime but attack real Saudi women who try to artistically express their cultural identities,” tweeted Saudi-American activist Amani Al-Ahmadi.

“How do you explain calls to arrest Black Saudi woman rapper & misogynoir thrown at her in the country that invited Nicki Minaj to perform?,” said Eltahawy to her followers.

In a bid to shake off the country’s ultra-conservative image and open up to the international community, Saudi Arabia has actively encouraged foreign artists to perform, inviting the likes of Janet Jackson, Mariah Carey, and Nikki Minaj.

Mecca Girl seems to be the latest troubling incident of censorship in Saudi Arabia. Media outlets are tightly controlled in Saudi Arabia and, due to the level of anonymity the platform affords, Twitter has emerged as a quasi ‘town square’ that allows residents to share news and views with a level of freedom not granted in other parts of society. In response, Saudi authorities have attempted to shape the information on Twitter.

In November 2019, Twitter employees Ali Alzabarah and Ahmad Abouammo, and marketing official Ahmed Almutairi, who has links to the Saudi royal family, were indicted in the US for accessing Saudi Twitter users’ private data.

“Our internal analysis shows the network was involved in various forms of platform manipulation, targeting discussions related to Saudi Arabia and advancing their geopolitical interests on the world stage.

According to Twitter, the 5929 suspended accounts were part of a broader network of 88 000 “spammy accounts” responsible for amplifying pro-Saudi messages through “inauthentic engagement tactics such as aggressive liking, Retweeting and replying.”

Twitter also divulged that its investigators had traced the coordinated operation to Saudi Arabia-based social media marketing company Smaat, who created, purchased or managed the spam accounts on behalf of their clients who happen to include “high-profile individuals, as well as many government departments in Saudi Arabia”.

Smaat is owned by a man called Ahmed Aljbreen, but US authorities have declined to say whether it is the same Aljbreen who was indicted in November for involvement in a Saudi operation to access Twitter user’s private data.

Saudi activist Manal al-Sharif, who now resides in Australia, famously quit Twitter in 2019 over her personal safety concerns. Mecca-born al-Sharif rose to prominence for leading the #Women2Drive movement in Saudi Arabia and was imprisoned for ‘driving while female’.

“Twitter, which was once a tool to change the discourse, give voice to the voiceless and push for social justice, is now becoming a trap — one that is used by our regimes to haunt and silence us. It is being used to propagate misinformation and spread regime propaganda on a greater scale than ever before,” said al-Sharif, who is also an information security expert.

Amnesty International shares al-Sharif’s concerns, reporting Saudi Arabia’s Specialized Criminal Court has been used to muzzle critical Twitter users. According to the Muzzling Critical Voices report released in February 2020, Saudi Arabian Human rights defenders, Issa al-Nukheifi and Essam Koshak have been convicted of “posing a threat to public order through their writing, including posts on Twitter.”

“The Saudi government’s rhetoric about reforms, which increased after the appointment in June 2017 of Mohammad bin Salman bin Abdulaziz Al Saud as Crown Prince, stands in stark contrast to the reality of the human rights situation,” the Amnesty report states.

Saudi Arabia has, on the one hand, started to implement some reforms such as enabling women to drive, but social norms are not as easily dismantled. Both activists and artists appear to still be at risk of arrest and imprisonment.

Influencers, DJs, and locals partied on to electronic beats, in scenes reminiscent of European rave, yet 120 men and women were reportedly arrested by local police for wearing “inappropriate clothes” and offending public morals.

The kingdom’s keen desire to open to the West, as set out in its Vision 2030 plan, remains very much at odds with religious conservatism and traditional norms that persist there. The soft-power ground gained by MDL Beast, and highly publicized reform announcements, is eroded by incidents like the backlash over Mecca Girl and calls for Asayel Slay’s arrest.

The regime’s eagerness to show a more contemporary face and invite the West in, often at the expense or in contradiction to its culture, has acted as a magnifier for the hypocrisy at play in Saudi Arabia. No matter how tightly controlled it may be, Twitter’s ability to expose this can only be a positive for freedom of expression in Saudi Arabia, now and into the future.