Risks and Opportunities of Medical and Industrial Cannabis legalization in Lebanon

Medical and industrial cannabis cultivation looks set to be legalized in Lebanon but the draft legislation currently before parliament locks out the illegal sector and fails to address the criminalisation of drugs. 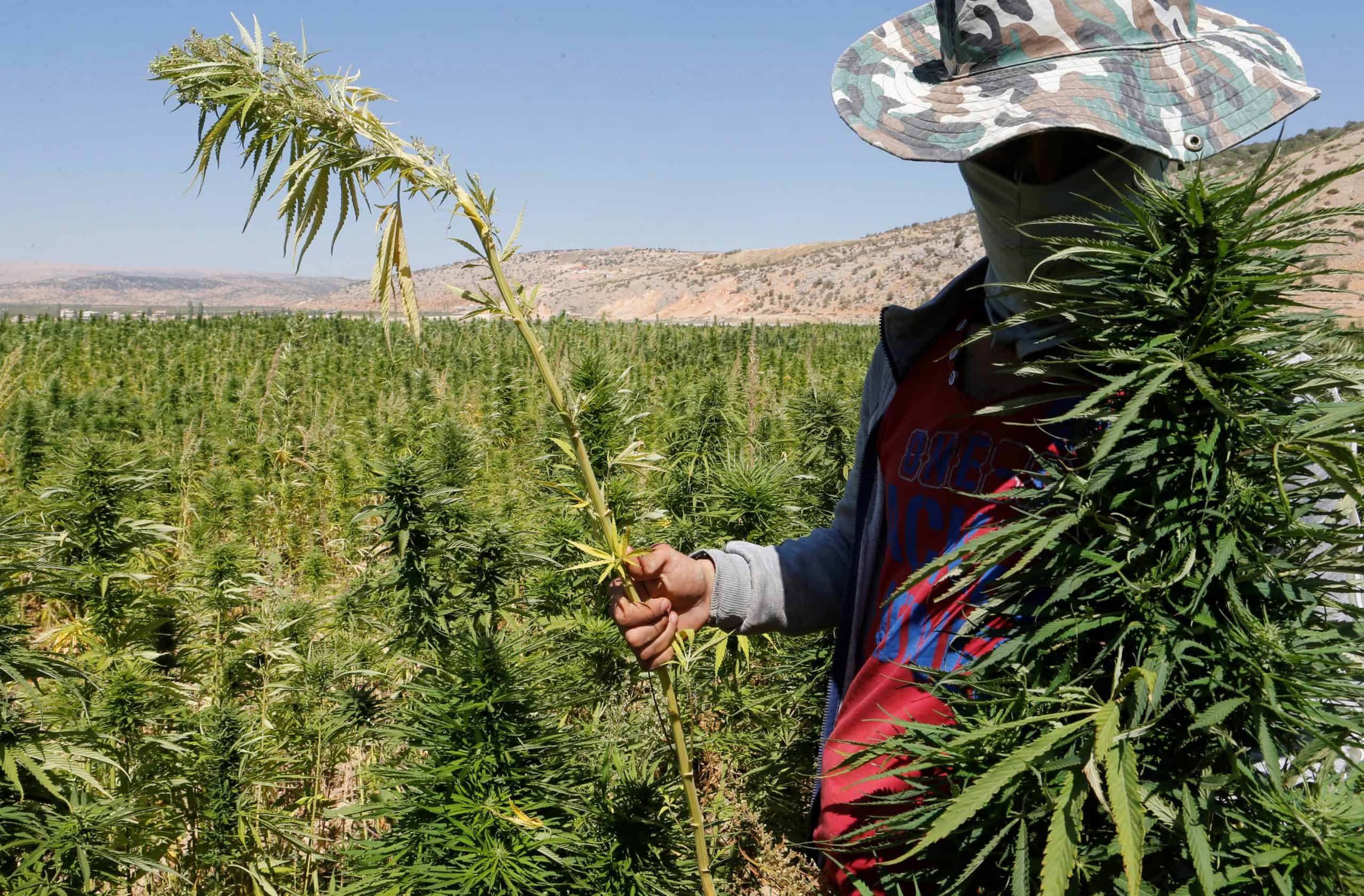 A draft law that would legalize medical and industrial cannabis cultivation has passed two parliamentary committees and is now set for a final vote in Lebanese parliament.

A legal medical and industrial marijuana sector promises to bring big bucks into Lebanon’s failing economy but there are concerns that the long-standing illegal sector will be shut out of the new industry.

The UN reports that “cannabis continues to be the most widely used drug worldwide,” and estimates around 3.8% of the global population aged 15-64, the equivalent of over 188 million people, are users.

Former Economy Minister Raed Khoury estimated that Lebanon could generate $1 billion in revenue from medical marijuana exports per annum. Legalization of cannabis has also been proposed in the past by Druze Leader Walid Jumblatt, but gained serious traction in the current parliament, after consulting firm McKinsey & Company recommended it as one of 150 initiatives to kick-start Lebanon’s sickly economy, in a report publicly released in 2019.

“Hemp crops in Lebanon cover an area between 200,000 and 300,000 dunums (10 dunums are equivalent to one hectare). Each dunum produces between 1,000 and 2,000 kg of raw cannabis that can be transformed into 4 to 8 kg of pure resin,” Lebanese University drug trafficking expert Hassane Makhlouf explained to Le Commerce du Levant.

Since the beginning of the war in Syria, Lebanon has all but abandoned its field destruction campaigns, instead focusing operations on traffickers and mules, meaning farms have an oversupply of product, according to Bekaa Chamber of Commerce Agriculture Department director Said Gedeon.

At its peak, the Lebanese recreational marijuana industry was worth an estimated $2 to $3 billion per annum, but the European market shift away from hashish and increased supply has pushed prices to a low of $13-$8 per gram. Farmers who used to earn $1000-$2000 per kilo of hashish are now making just $400.

Under the draft legislation, currently headed for a final vote in parliament, a new medical and industrial cannabis industry would be built around the cultivation of different strains not usually grown in Lebanon.

The new legal sector would produce cannabis containing less than 1% THC for medical and industrial use, running parallel to the existing illegal sector that thrives in the Bekaa Valley.

Under the law, a licensing system would be introduced that excludes anyone who has a criminal record from participating in the growth, sale, manufacture, and export of cannabis and its derivatives.

Critics of the legislation argue this will further stigmatize those who participate in the illegal sector and lock them out of what promises to be a highly lucrative new industry.

There are concerns that, as with other industries in Lebanon, the rich will have a death-grip on the economic opportunities, and regular Lebanese people, and the Bekaa valley producers, will see little to no “ trickle-down” benefits.

The draft bill approved by parliamentary committees has also been criticized for not addressing the possession and cultivation of cannabis for personal use in Lebanon, where 3000-4000 are arrested per year for drug crimes, primarily the consumption of hashish. It, instead, proposes to implement harsher penalties on violations of the law.

Nevertheless, Lebanese parliamentarian and draft law subcommittee member Yassine Jaber is optimistic about the potential for a new legal cannabis industry in Lebanon.

“We have a competitive and a comparative advantage in the cannabis business. Our soil is among the best in the world for this, and the cost of production is low compared to other states,” she told Al Jazeera.

Arabia Policy sat down virtually with drug policy expert Dania Putri from the Transnational Institute to get her take on the draft legislation under consideration in Lebanon and the challenges of cannabis legalization globally.

Arabia Policy (AP) What are your thoughts generally on the legislation put before the parliament?

Dania Putri (DP): It looks like the draft bill was not designed specifically to address the issue of criminalization and to combat the illicit market, but probably to facilitate foreign investors and/or companies that are interested in developing a production system for low-THC cannabis (ie. hemp) and/or CBD-goods in Lebanon.

Cultivating low-THC cannabis for industrial, and to a certain extent medical, purposes requires large or mega-scale cultivation and processing facilities, so oftentimes such production systems tend to be monopolized or “oligopolized” by a smaller number of actors.

Nonetheless, of course, it’s refreshing to see something happening at the parliamentary level. At least it shows that there’s interest to address the cannabis issue in Lebanon and it might have opened up new avenues for public debates on other, and hopefully better and more inclusive, regulatory initiatives.

AP: Do you agree with the proposed licensing system?

DP: No, I think it should be more inclusive and should at least include pathways for criminal expungement.

AP: Do you think a more holistic approach is needed for the industry to be successful- one that better integrates existing illegal cannabis industry and decriminalizes cannabis use?

DP: Yes, for sure! Decriminalization of small-scale possession and ideally also small-scale cultivation should always be prioritized — which, in the beginning, can be done in a ‘de facto’ way as well, for example by coordinating with law enforcement agencies that can issue directives for their officers operating on the ground.

And, yes, I think the ideal model should involve actors currently operating the illicit market, especially those who do so for subsistence, like small-scale farmers in the Bekaa Valley. Such actors have been the ones who bear the brunt of prohibitionist policies, the very policies that have made drug trafficking more risky and thus more profitable — but only for the big guys.

Also, we should note that the majority of cannabis, including hashish, produced in Lebanon is most likely sold and consumed outside the country, if not the region. So, even if they have a very good internal regulation model, Lebanon would still have to cooperate with other countries, for example, the Netherlands where Lebanese hashish is also commonplace (though illegally traded) to find ways to regulate the trade.

AP: Based on your experience, in countries that have a well-established illegal cannabis sector, does that illegal sector continue after legalization?

DP: Unfortunately in Canada – where legal cannabis regulation was implemented in October 2018 – the current illicit market prevails. This most likely has to do with the lack of options and procedures for illicit actors to transition to and enter the licit market. There’s very little effort to expunge criminal records, too, so reform advocates now are trying to push Canadian policymakers to address this gap.

In Uruguay the illicit market also prevails, but to be honest I have had trouble finding reliable studies on this particular issue. But, interestingly, in Uruguay small-scale cannabis possession and drug use in general have never been criminalised.

The thing is, the illicit market will always remain, as long as:

A more realistic goal is to minimise harms and violence associated with the drug market, which I think can be addressed by reducing the intensity and frequency of drug-related crackdowns, and by allowing new (decentralised) modes of production and distribution to form, like the Cannabis Social Clubs and home-growing model for example.

AP: What are some of the challenges countries who decriminalize low THC cannabis production for medical and industrial uses face? What effects does it generally have on criminal consumption?

DP: As you may have guessed, decriminalising low-THC cannabis production for medical & industrial uses would probably have little impact on illegal consumption.

Switzerland has allowed and legally regulated low-THC cannabis cigarettes but of course this does not satisfy most users’ needs.

Many countries have also long allowed low-THC cannabis production (of between 0.3% and 1% THC) for industrial uses. In China, for example, they have large-scale hemp production, while the U.S. just recently clarified some regulations surrounding hemp production.

Of course this often has little impact on regular non-medical and recreational consumption and production of cannabis, especially since in Europe and North America, users are accustomed to consuming relatively potent cannabis with THC content that can be higher than 20%.

Another challenge is that production is dominated by a few large actors, as I explained above, and this has remained a difficulty in countries like Colombia and Jamaica, where legal reforms included high-THC cannabis too.

Thank you to Dania Putri for taking the time to answer Arabia Policy’s questions, on a fascinating area of policy, especially for the Middle East and North Africa region where cannabis is a part of the economic, social, and cultural fabric of many countries.