All Gulf states have now banned travel in and out of their countries. Fears are growing over the conditions of migrant workers and their futures in the Gulf as the coronavirus crisis continues. 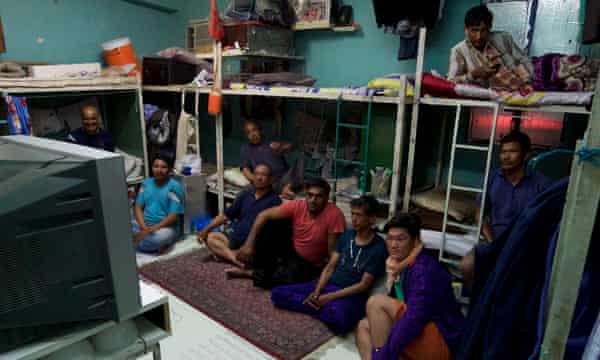 The Gulf Cooperation Countries are home to some 35 million migrant workers, according to International Labor Organisation statistics. The majority of low-income laborers from Asian countries like India, Nepal, and Bangladesh are housed in large camps in “crowded and often unhygienic conditions,” GCC based advocacy group Migrant-Rights.Org reports.

Today the Guardian reports Qatar’s biggest labor camp is locked-down to prevent the spread of COVID-19 after hundreds of workers tested positive for the virus.

Police are reportedly patrolling the perimeter of the camps in Doha’s “Industrial Area”. Meanwhile, fear and uncertainty is growing amongst the workers penned up inside.

“The situation is getting worse each day. Workers from camp 1 to camp 32 are in lockdown. My friends who live there are in extreme panic,” a Bangladeshi worker told the Guardian.

A Nepali man described the new rules inside his camp, telling the news outlet, “we are not allowed to walk in groups or eat in a tea shop. But you can still buy food and take it home. I’m worried about my family back home. There won’t be anyone to take care of them if anything happens to me.”

Migrants-Rights.Org says social distancing is impossible in camps where people are “housed six or eight to a room in the best of situations.”

“These conditions leave migrants vulnerable to health issues in the best of circumstances, and will especially accelerate the spread of the virus,” the NGO added.

Aside from the fetid and cramped camp conditions, Associate Editor of Migrant-Rights.org Vani Saraswathi said she also holds grave concerns over the financial futures of workers and their families.

“The government should never have kept workers in such appalling conditions, but the least they can do now is ensure workers get their wages on time. They must keep an eye open for wage deductions and delays,” said Saraswathi.

“If workers can’t send money home now, their families will face real hardships just when they need money the most.”

The number of confirmed cases of COVID19 in the combined Gulf states of Qatar, Bahrain, Saudi Arabia, Kuwait, and the UAE has shot up to more than 1,200.

On March 11, Qatar’s Ministry of Public Health announced 238 new confirmed cases linked to three cases identified in “expatriates from a “residential complex”. Though it is not specified, many have deduced that a labor camp was likely the hotspot of the outbreak.