The extraordinary visit could indicate annexation will happen within months. 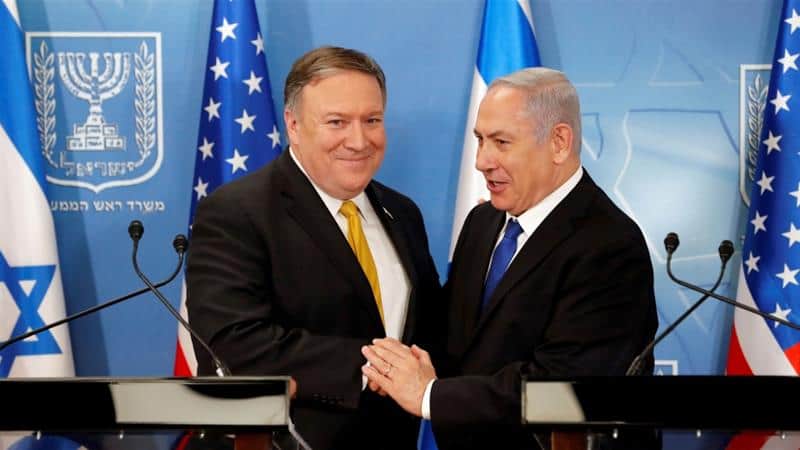 On Wednesday, May 13, the US Secretary of State Mike Pompeo flew to Jerusalem for a surprise visit. The COVID-19 pandemic has seen world leaders across the globe opt for digital video-conferencing methods to discuss matters of state, but Wednesday’s discussions “required a face-to-face meeting,” according to Pompeo.

The US and Israel played down the meeting, with the US State department releasing a single paragraph to say the meeting would focus on COVID-19 cooperation and measures intended to counter Iranian influence in the region. In remarks before the meeting, Israeli Prime Minister Benjamin Netanyahu added a third point; He and Pompeo would discuss the new Israeli government’s role in “promoting peace and security.”

The visiting US diplomat and Israel’s PM exchanged pleasantries and reconfirmed mutual support, as if the meeting was anything but extraordinary, but the importance of the meeting’s purpose could not be concealed.

The meeting was Pompeo’s first diplomatic mission in two months. Israel granted the US diplomatic exemption from its stringent COVID-19 measures which require quarantining for anyone visiting from abroad. The risk taken to realize the meeting was accentuated by the fact that Pompeo could not meet his local ambassador after he reported respiratory complaints.

“It’s important for a number of reasons that we do this face to face,” Pompeo told Israel Hayom in an exclusive interview.

From the Israeli perspective, the importance of the meeting could not be understated as the Israeli government chose to postpone the swearing-in of its new government to accommodate for the meeting. After all the political drama in the country, the formation of the government was still seen as less important compared to the Pompeo visit.

In the interview with Israel Hayom, Pompeo emphasized an additional point of discussion for his six-hour visit to Israel. “I want to bring them up to speed on the progress we think we are making on President Trump’s Vision for Peace,” Pompeo told the Israeli outlet.

Pompeo confirmed he intended to discuss the annexation of large swaths of the Westbank, or “extending Israeli sovereignty to Jewish communities in Judea and Samaria” as Israelis call the controversial move. “This is one of the topics we will certainly discuss,” Pompeo stated.

Pompeo’s interview revealed that the US and Israel intend to implement the ‘peace agreement,’even though the Palestinian side, and much of the international community, opposes the plan, seeing it as nothing but Israeli annexation that will destroy any prospect of a two-state solution.

During the press conference prior to the meetings, Pompeo and Netanyahu stated the US-Israeli alliance had “never been stronger” and denounced Iranian leaders for “continued aggression” during its COVID-19 epidemic.

Pompeo said it was “evidence of the soul of the people that lead that country,” even as he was there to discuss aggressive action against Palestinians while his own country is in the midst of a health crisis.

Rushing annexation as an electoral ploy

The former US ambassador to Israel, Daniel Shapiro appeared to question Pompeo’s motives for the visit. “I think the Trump administration very much wants this annexation to happen,” the Obama-era ambassador told the French Agence France Presse in an interview.

“It wants to have an achievement in Israeli annexation that it can tout to President Trump’s evangelical supporters (and) right-wing Jewish supporters to excite them and energize them,” the former Ambassador told AFP.

With a mere 18-months left in charge, Netanyahu similarly might be rushing the process in order to ensure the annexation happens as part of his legacy before stepping down as PM, as agreed in his power-sharing deal with Benny Gantz.

The threat of an Israeli annexation of Palestinian lands is so great the EU considered it the “most important item’ on the agenda of its Friday, May 15 meeting of EU foreign ministers, according to its foreign policy chief.