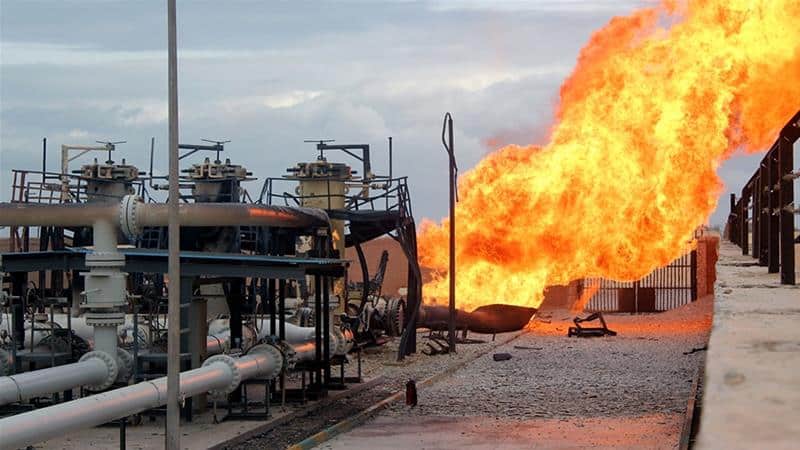 The pipe carries gas to homes and factories in North Sinai’s capital el-Arish. It has been blown up over ten times since 2013. No group immediately claimed the attack but, the way it was carried bears marks of ISIS affiliate Wilayat Sinai’s (Sinai Province) hit-and-run operations.

Masked militants attempted to blow up a natural gas pipeline in Egypt’s northern Sinai Peninsula on February 02, 2020. There were no casualties and gas imports were unaffected.

The February pipeline attack, as well as the January execution of ISIS-alleged Egyptian spy Suleiman Mutawe and various hit-and-run attacks on Egyptian forces claimed by Wilayat Sinai, show the group remains operational and dangerous. “There is no end in sight to Wilayat Sinai’s guerrilla campaign against the Egyptian Army and other foes, despite the launch of multiple counter-insurgency operations by the Army since 2013,” wrote Joe Truman for the Long War Journal.

Sisi’s Israeli-aided war on terror in North Sinai has successfully killed and captured high-ranking jihadis, and the governorate is notably more secure now than at the height of Wilayat Sinai’s de facto rein in the region in 2014-2015.

Last May, speaking of the group’s continued presence in the region, Human Rights Watch said: “its militants have committed horrific crimes, interviewees said, including kidnapping scores of residents and members of the military or police and extrajudicially killing some of them.”

With support from Israel, President Sisi has been maintaining pressure on terrorists in Sinai by launching a number of air-strikes in various hot spot areas in the region. In November 2019 a Cairo court sentenced two militants to death, including notorious North Sinai operative Hisham Al-Ashmawy in the hope of deterring other terrorists.

However, as Sinai specialist Zack Gold pointed out, the government’s efforts have not yet yielded the expected outcome. “Without Ashmawy, both IS and Al-Qaeda-linked groups have managed high-casualty attacks on both sides of Egypt,” Gold wrote.

He noted, meanwhile, that the government’s operations have been mildly successful and that there are reasons for hope, despite the apparent determination of the regions’ Jihadi groups. “The Egyptian army, especially, has proved that when it takes the initiative it can keep the pressure on militants in Sinai.”

The latest attack came just a month after the new East Mediterranean Gas Company (EMG) pipeline began transferring gas from Israel’s Leviathan field. Gas flows between Egypt and Israel have long been controversial, with pipelines consistently attacked when security spiraled out of control after the 2011 revolution.

Partners developing the project are apparently confident that “the flow of gas from Leviathan to Egypt is continuing as normal,” even as the latest incident vindicates commentators like  Gold who doubted its viability on security grounds.

“If they (Egypt) can’t protect themselves and their own infrastructure, it will be a struggle for them to protect this gas-line infrastructure,” Gold argued after the agreement’s announcement in September.

Egypt’s inability to assure its own security raises serious doubts about new infrastructure plans like pipelines, water or port facilities, especially generally for the North Sinai region. This, however, hasn’t stopped the Trump administration from offering Egypt US$9 billion in economic grants under the US president’s “Peace to Prosperity” plan for the Israel-Palestine conflict.

If Trump’s “deal of the century” gains the momentum and traction Washington and Israel seek, it would be a boon for Egypt’s struggling economy and provide economic development desperately needed by residents of the desolate Northern Sinai.

While it is highly unlikely that Trump’s “Peace to Prosperity” initiative will be successful (even Mike Pompeo has stated “one might argue” that the plan is “unexecutable”), it’s worth investigating the plan’s potential benefits for Egypt.

The ‘Strengthening Regional Development and Integration” section of the plan promises funds to create new opportunities for Palestinian businesses while increasing commerce with neighbors Egypt, Jordan, and Lebanon. Twelve projects are earmarked for Egypt, with four located in Sinai.

Under the plan, energy, water, transportation, and tourism projects in Sinai would benefit from US$ 625 million in grants, US$1 billion in concessional loans and US$ 375 million in private.

But the plan is vague when it comes to who exactly would pay for these projects.

“Besides omitting a political solution, the (Trump) administration’s economic plan cannot answer basic questions about implementation: who is going to fund the 50 billion dollar price tag; what government(s) will oversee the 179 projects identified; and where are the borders of the Palestinian land area where these projects will take place?” said visiting Carnegie Endowment for International Peace fellow Zaha Hassan.

At the same time, there have been insistent reports that Egypt would agree to cede part of Sinai for Gazan resettlement. Some of these rumors swirled during a “deal of the century” summit in Bahrain last summer. Economic opportunities and an increasingly cozy Egyptian-Israeli security relationship appear to be the basis of pro-Palestinian commentators’ concerns over whether Gazans will be forced into North Sinai under Trump’s deal.

In an opinion piece for Middle East Eye in July of last year, Amr Darrag, former minister and Chairman of the Egyptian Institute for Political and Strategic Studies claimed that the implementation of the “deal of the century” may include “the settlement of Palestinians” in Sinai.

“Sisi is conspiring to dedicate a swathe of land in the Sinai Peninsula to the settlement of Palestinians,” Darrag said. “Gaza sources say the area will stretch from Rafah to El Arish and some parts of northern Sinai, which will remain under Egyptian control.”.

But these allegations were quickly quashed by Egyptian foreign minister Sameh Shoukry who said “not one grain of sand” from Egypt’s territory will be relinquished. Peace Plan architect Jason Greenblatt also denied these claims, tweeting in April 2019: “Hearing reports our plan includes the concept that we will give a portion of Sinai (which is Egypt’s) to Gaza. False!”

Meanwhile, Aaron David Miller, a former negotiator, and analyst on Middle East issues for both Republican and Democratic administrations had this to say about the DoC: “You can’t do serious economic development without resolving the security and political issues that allow investors and internal economic growth and employment.”

The recent pipeline attack in Sinai crystallizes the problem for Egypt. Even if the DoC is accepted, Egypt’s inability to ensure security in Sinai means that any funds it would receive may not be of much use. Until Egypt, with or without the help of Israel, can calm the restive Sinai, its development will benefit no one.