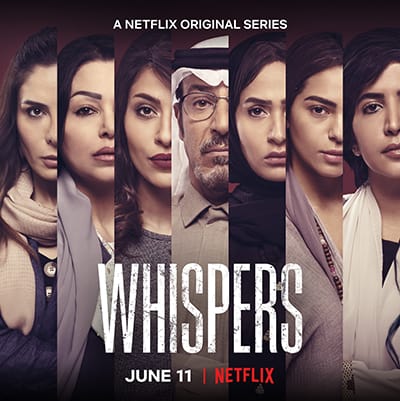 The Saudi thriller and drama series “Whispers” will be available on Netflix for 183 million users in 190 countries worldwide from June 11, the streaming service announced yesterday. The eight episode series is Netflix’s first original Saudi show and was produced by the Saudi Entertainment Phenomena Company “EP Saudi.”

“Whispers” charts the story of a family navigating the pitfalls of launching a new business against the backdrop of the recent death of patriarch Hassan. The storyline dredges up Hassan’s mysterious past. The show is directed by Saudi female filmmaker, Hana Alomair, and stars popular actor Abdul Mohsen Alnimer.

“Whispers” is a Saudi-produced dramatic thriller series that offers a new take on storytelling and marks my first time working with the great actor, Abdul Mohsen Alnimer,” Alomair said.

“The series also features several unconventional female characters who truly embody the reasons why this project is so close to my heart,” she added.

“Whispers” is the latest title to be added to Netflix’s growing stable of Khaleeji and Saudi options available worldwide through the streaming service. Content director for the Middle East, North Africa and Turkey Nuha Eltayeb said Netflix was thrilled to bring “great Arabic content” to a global audience.

“We believe that great stories can come from anywhere and be loved  everywhere. ‘Whispers’ is a fast-paced drama and every episode holds a new clue that will keep viewers wanting more,” Eltayeb said in a press release.