Netanyahu's corruption trial begins today, one week after he was sworn in for a record fifth term as Israel’s prime minister. 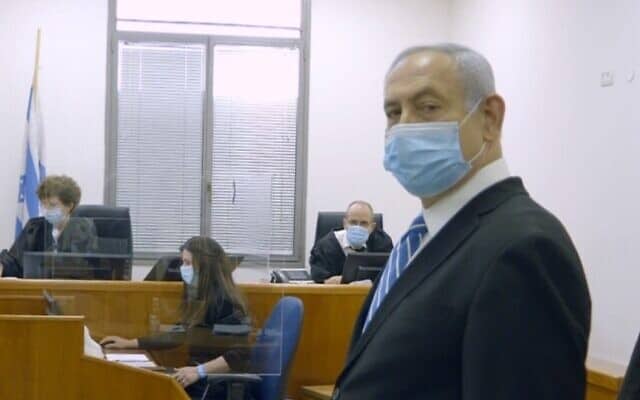 The hearing is currently underway and Netanyahu’s lawyers have asked for the trial date to be set for spring 2021, saying they need more time to prepare.

Before entering the small Courtroom 317, where he is appearing before a panel of three judges, Netanyahu made remarks to the waiting media scrum decrying the trial as “delusional.”

“What’s on trial today is an effort to frustrate the will of the people — to bring down me and the right-wing camp,” the prime minister said.

“For more than a decade the left has failed to do this at the ballot box … In recent years they have found a new patent—police and prosecutors have joined the ‘Anyone but Bibi’ gang to stitch up these delusional and fabricated cases, this delusional trial,” he continued.

“They aim to bring down a strong prime minister from the right and to distance the right from power for many years,” an angry Netanyahu added.

On January 28, Israel’s attorney general indicted Netanyahu on bribery, fraud and breach of public trust charges in three separate cases which have not been able to go to trial due to the COVID-19 pandemic.

The trial’s judges turned down Netanyahu’s request to not appear in the dock in person on May 20. The prime minister does not have to step down over the case, which could take years, and denies all wrongdoing.