How a Global Superpower Fights a Virus

China and the US are taking radically different approaches to combatting the pandemic. 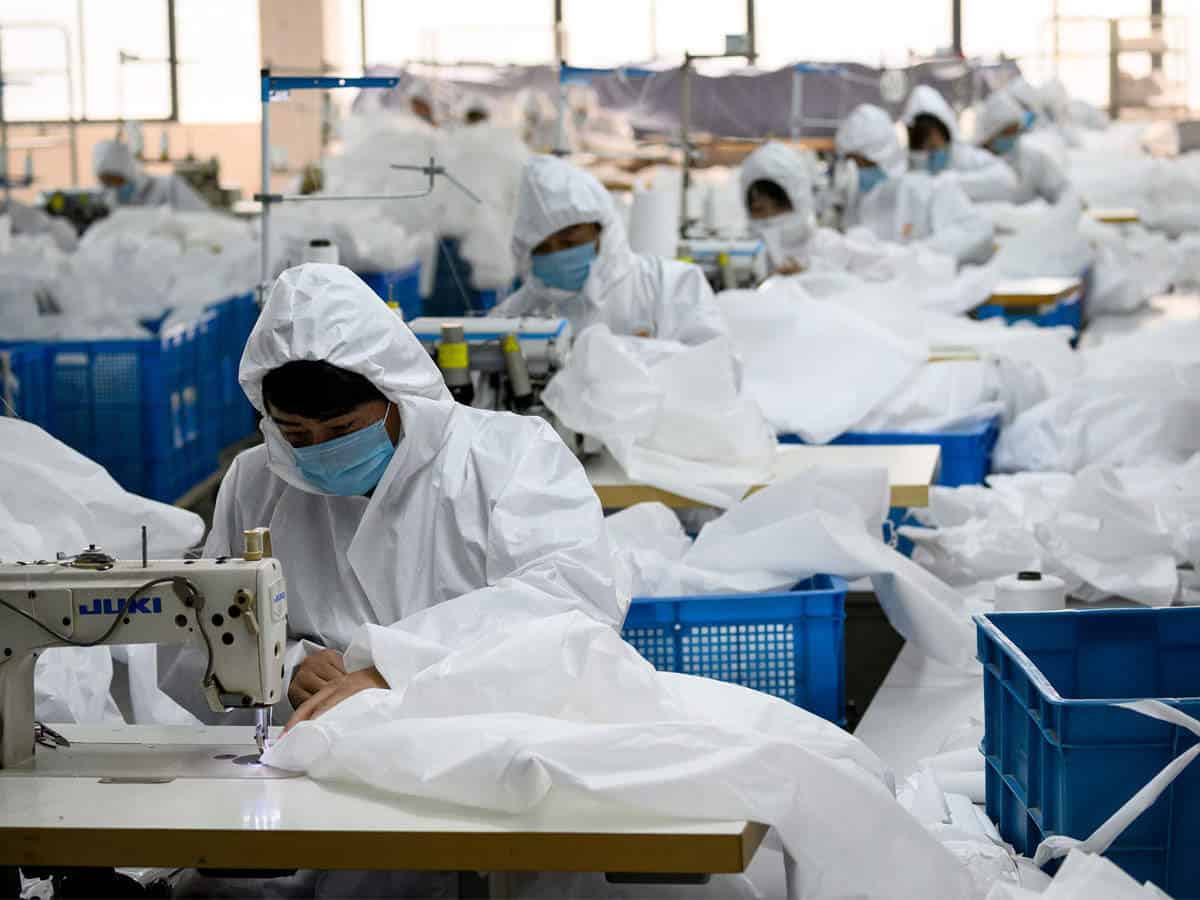 Millions of people around the world are sitting at home. They are under quarantine, in enforced lock-downs, or are simply out of a job. The impact of COVID-19 is only just becoming clear, and policy-makers around the world are grasping at straws to find the best approach to limit infection-rates and minimize economic damage.

The two current global superpowers have taken radically different approaches. China and the United States are in different phases of their national epidemics, but their strategies reveal a lot about their priorities. In order to build a better idea of available solutions and their consequences, we need to compare the two strategies side by side.

There are two ways this global health crisis can negatively impact people’s lives: getting sick, or losing income. Solving both problems at once appears a difficult balance to strike and the two global superpowers appear to have chosen contrasting priorities.

China’s theory of change relies on a brief but painful economic catastrophe. The government’s aggressive measures limit the amount of infections, but could lead to greater economic damage in its aftermath. The US approach aims to do the exact opposite. The American approach entails a brief, but painful, medical catastrophe. Measures intended to keep the economy intact result in more infections but reduce economic impacts during and after the crisis.

As much as the current approaches differ, the initial response in both countries was remarkably similar. Before the scale of each national crisis became clear, the initial instinct of national leaders was to play politics.

In the first six weeks of the Chinese outbreak, the government stamped down on whistle-blowers and was accused of hiding the scale of the outbreak from the rest of the world.

Across the Pacific, US President Donald Trump spent much of the first six weeks following the first recorded case in the US, downplaying the risk and repeating that the virus was ‘under control’.

After the immense scale of their respective national crises came into sharp focus, both governments embarked on historic and unprecedented missions. The approaches they chose, however, could not have been more different.

China realized the potential scale of the outbreak at the end of January when over a thousand cases had been detected. Chinese President Xi Jinping invited the WHO and international experts, including the American Center for Disease Control (CDC), to come investigate the virus as it formulated a strategy.

Chinese health experts identified the weaknesses in the Chinese healthcare system’s ability to cope with the virus. What followed grabbed the world’s attention as the might of the centralized Chinese state was aimed at doing what it does best: Construction.

Having turned sleepy villages into multi-million-people cities in recent decades and having had to rapidly build infrastructure to combat SARS in 2003, the Chinese were up to the task. In six days Chinese workers built a hospital capable of housing 2000 COVID-19 patients, while 20,000 healthcare workers from across the country flew into the epicenter of the outbreak.

This rapid construction made sure there were sufficient hospital beds, protective equipment for staff, and specific hospitals dedicated to fighting the virus. The 11 million unfortunate people living in Wuhan experienced a different example of centralized state power. The government gave them only four hours time before the complete lock-down of their city began. Overnight, all businesses were closed, industry halted, and streets started resembling a ghost town, save for the occasional patrolling military or police units.

The lack of privacy in China meant that the state knew where its citizens were, and what they needed. This helped Chinese authorities in tracking down isolated cases and finding clusters of infections. It also meant that all citizens with prescriptions for existing conditions were rapidly supplied with a three-month supply of the medicine they required. The state provided anyone economically affected by the virus with supplementary income and made money available to support struggling businesses. Free testing and treatment was given to anyone even remotely suspected of being infected.

After the initial peak, the number of new infections started coming down, and within a month China could proudly boast of recording days without new infections. The WHO’s assistant director general Bruce Aylward was in China to witness the process.

“China’s bold approach to contain the rapid spread of this new respiratory pathogen has changed the course of a rapidly escalating and deadly epidemic,” calling the approach the “most ambitious and I would say agile and aggressive disease containment effort in history,” Aylward said.

But Aylward is not an economist. Although China has made efforts to support its economy, the real economic consequences of it’s rapid slow-down and current careful restart are yet to be seen.

The American approach to the pandemic contrasts sharply with the Chinese method. The US strategy is summarized most easily by a tweet by US President Donald Trump: “We cannot let the cure be worse than the problem itself.”

Once the scale of the problem in the US became clear, several examples of other countries’ approaches had emerged. Britain at the time was counting on ‘herd immunity,’ Koreans had turned the rapid testing of citizens into an art form, and Western healthcare systems were gaining their own experience with the virus.

The president exuded confidence whenever the topic came up and the message was clear, the United States would be able to cope with COVID-19. Policy-makers were downplaying the effects of the virus and highlighted the merits of American healthcare. The United States spends more than twice on healthcare per-capita than any other country, and the Republican administration assured Americans they were about to get value for their money.

Two weeks later, New York City was reporting thousands of cases and every US state appeared to show COVID-19 infections. Xi Jinping had faced a point-of-no-return that called for drastic action several weeks earlier, and now it was his American counterpart’s role to marshal his country into action.

And act they did. The American approach focussed on keeping the economy as strong as possible. The aim was to limit the suffering of citizens by preventing unemployment, poverty, or the loss of retirement funds linked to stock markets. The stupendous financial power of the United States and its Federal Reserve were put on a war-footing to save US markets, and with them, the prosperity of American citizens.

Just as China’s efforts were called the ‘most ambitious, agile and aggressive’ approach to disease containment, similar descriptions could apply to the American approach to saving its financial markets. The US government prepared an unprecedented $2 trillion dollar stimulus package to provide liquidity and support to its economy. As mind-boggling as this amount might be, it is only a fraction of the money the US is about to spend.

Powers granted to the Federal Reserve following the 2008 crash are now coming to bear on global financial markets as the Federal Reserve has announced it will spend up to a trillion dollars to help capitalize banks. One trillion dollars, everyday. Highlighting the priorities of the US strategy, the total amount hospitals are receiving is a one-time $100 billion dollar assistance package, or 10% of what the US plans to spend on banks per day until the end of the month.

Every single day for the rest of the month, the central bank will pump a trillion more dollars into supporting failing banks. The mission is clear: Keep Americans employed, US markets intact, and get back to business-as-usual as soon as humanly possible.

According to financial expert Dylan Ratigan, all together the US government is ready to spend 14 trillion dollars in order to save financial capitalism and preserve its economy.

These two superpowers have staked their strategies on different priorities. Each strategy contains its own unique dangers and advantages.

China’s rapid containment could lead to millions of Chinese people suffering from poverty and hunger as a result of an economic shock caused by the containment efforts. The as yet unknown economic results from the containment strategy could very easily change international perspectives on the success of the Chinese approach.

The choices made in the US could similarly have painful effects. The fragmented and privatized nature of American healthcare could make effective containment difficult. The US has rapidly become the nation worst-affected by COVID-19.

The CDC’s worst-case scenario predicts between 160 and 214 million infected Americans, which would lead to between 200,000 and 1.7 million deaths. This would not only be a tragedy of historic proportions, it could very well make the $14 trillion the US has invested in its efforts go up in smoke as markets and political leaders struggle to cope with such a catastrophe.

It is important to note that both strategies do not exclude elements of the other. Valiant attempts are made by state and city governments in the US to contain the virus and procure the necessary protective gear and medical equipment to test and treat COVID-19 patients. With risk to their own lives, medical staff across the country are doing whatever they can, even when they cannot properly protect themselves from the virus.

Meanwhile, in China, the government is preparing billions in infrastructure-spending to boost its economy and is seeing industry gradually return as its COVID-19 expertise and medical supplies have become an unforeseen new export product.

Many national leaders are now facing the same point-of-no-return that Xi Jinping and Donald Trump experienced. Which superpower’s example they will follow, and what consequences that might bring, will become clear in the weeks and months ahead.