As the Grand Ethiopia Renaissance Dam has divided support, Sisi courts the West. 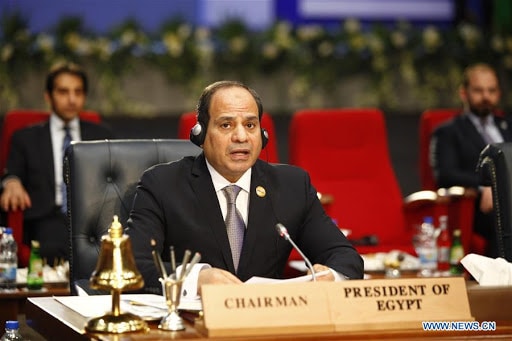 The note first made its way from Egypt’s Foreign Minister Sameh Skhoukry to his French counterpart Jean-Yves Le Drian.

Skhoukry told the French Foreign Minister that Egypt considers it important that France and other EU countries push Ethiopia to sign an agreement on the filling and operation of the Grand Ethiopia Renaissance Dam to “preserve security and stability in the region,” according to Egypt’s Foreign Ministry.

Egypt is worried that Ethiopian plans to rapidly fill the GERD reservoir could severely limit the amount of water that flows through the Nile, which supplies Egypt with 90% of its water.

Egypt is now trying to leverage its alliance with France in Libya into a potential shared position on the Dam.

Egypt and France are both members of the coalition supporting General Khalifa Haftar’s Libyan National Army (LNA). Haftar’s forces now occupy most of Libya and have attempted to conquer Tripoli. The Libyan capital is the last significant stronghold of the UN-backed Government of National Accord (GNA), supported militarily by a recent influx of Turkish forces and mercenaries.

While both France and Egypt reiterated their commitments on Libya, it was Sisi’s note to Macron that caught the most attention.

The contentious negotiations over progress regarding the Grand Ethiopia Renaissance Dam have resulted in the forming of two political blocs.

African nations generally support Ethiopia, with outright support from Sudan and several African leaders urging for an ‘African solution’ to the matter.

On Egypt’s side are most Arab nations, with the Arab League Council declaring on March 5 that Egypt’s ‘historical water rights’ should not be endangered.

In an attempt to break the stalemate, Egypt is now actively lobbying Western countries to voice their support for its position. Sisi’s foreign minister has now actively courted Paris, Brussels, and Washington.

Trump has already voiced support for Sisi, while the Egyptian foreign office is clearly eager to build on French-Egyptian collaboration in Libya to extend to supporting its position on the Grand Ethiopia Renaissance Dam.