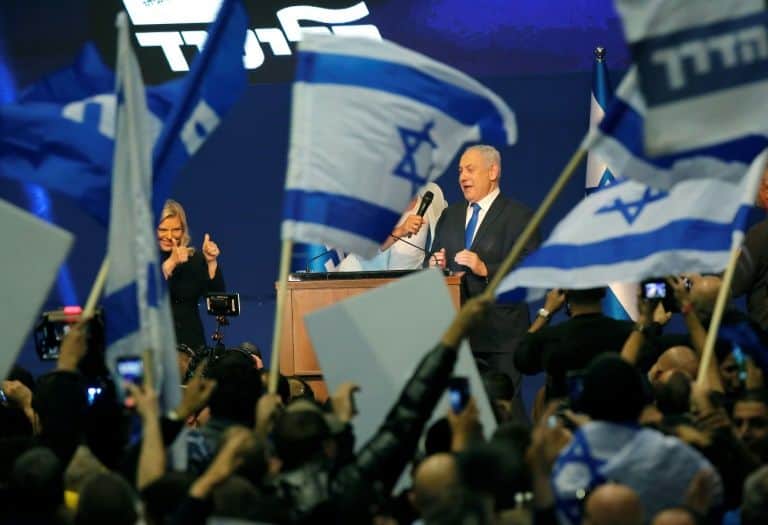 Exit polls are predicting the right-wing bloc led by Likud will take 59 seats, ahead of opposition center and center-left parties who polls predict will win 54-55 seats.

If predictions are correct, Netanyahu’s grouping will become the largest in parliament but, will still fall short of gaining a 60 seat majority.

Nevertheless, Netanyahu claimed victory and declared the outcome “the biggest win in my life”.

“What a joyous night,” exclaimed Netanyahu to a cheering crowd at Likud’s Tel Aviv election headquarters. “This victory is especially sweet because it is a victory against all odds … We turned lemons into lemonade.”

Netanyahu also told supporters he would get to work negotiating a new coalition immediately. A return to political deadlock is a possibility, however,  if the Prime Minister once again fails to form a government. Commentators expect some leftists will defect to a Likud-led coalition.

The election result comes two weeks ahead of Netanyahu’s March 17 court date where he will face charges of bribery, fraud, and breach of trust, connected to three separate cases. The Prime Minister has protested his innocence and claimed the charges are part of a politically motivated “witch hunt”.

The third poll in under a year and the pending corruption trial presented the perfect opportunity for Opposition Leader Benny Ganz to wrest power from Netanyahu, who is seeking a record fifth term in office.

Alas, with nearly three-quarters of the ballot counted, it appears highly unlikely that Ganz’ plans will come to fruition He has so far stopped short of conceding defeat but recognized the results are not looking good for his Blue and White party.

Ganz’s supporters were shocked by the vote. Even though he was previously unable to form a government, they had been buoyed by polls putting him slightly ahead as well as the September election results, where Blue and White took 33 seats to Likud’s 32.

“I realize and share your feelings of disappointment and pain, for this isn’t the result that we wanted to happen,” he told supporters gathered at their election headquarters.

He also assured supporters Blue and White would not compromise its principles and wait for final results, affirming an election promise not to partner with Likud to form a majority coalition, as long as Netanyahu remains Prime Minister.

The preliminary results also appear positive for the Arab Joint List party who will be the third-largest with 17 seats this time around, compared to 13 in the last election.

A victory will pave the way for Netanyahu to implement his election promises and annex Jewish settlements in the West Bank and Jordan Valley, home to some 600 000 Jews. The move is backed-up by the United States’ ‘Deal of the Century’ which, in a departure from international law and previous US positions, considers the settlements to be legal.