The explosion left at least 30 killed and dozens badly burned in the busy Afrin marketplace on Tuesday. 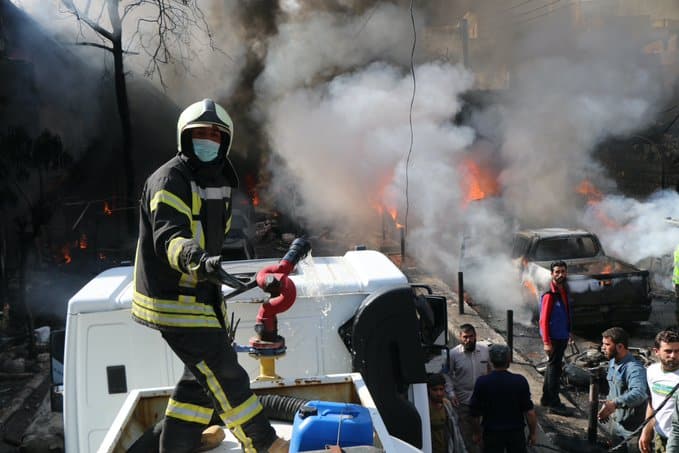 Syrian humanitarian groups and Turkish authorities reported that a fuel tanker rigged with an IED exploded in a crowded outdoor market on Raju Street, Afrin, killing somewhere between 30 and 40 civilians.

Syria Civil Defence, also known as the White Helmets, tweeted that “30 people so far is the death toll from the horrific explosion that hit a market in #Afrin City in #Aleppo today.”

“Most of them were burned to death in the inferno,” caused by Tuesday’s explosion, the organization added.

The UK-based Syrian Observatory for Human Rights (SOHR) said it expects the death toll to rise due to the large number of people badly burned in the blast.

“SOHR activists have documented the death of at least 22 persons due to the explosion of a booby-trapped fuel truck in an outdoors market on the road to Raju township in the Turkish-controlled city of Afrin,” according to a report on the group’s website.

“The number of fatalities is expected to rise, since there are more than 27 wounded some of whom sustained serious injuries,” SOHR said.

Graphic videos circulating on Twitter show the bodies of victims, burned beyond recognition, lying on the pavement alongside burned-out car bodies. “The scenes are unspeakable from this tragedy,” said the war-weary White Helmets.

Fixed eternally in the mother and child sacred embrace, two victims of the #Afrin inferno were found burned to death, their bodies still clutching each other. The scenes are unspeakable from this tragedy and our #WhiteHelmets continue to work through the devastation. pic.twitter.com/yOa6zmx7oY

According to Turkish state-run news outlet Anadolu Agency, the casualty count from the attack in the border city of Afrin, which is controlled by Turkish-backed militias, could be as high as 40. Up to 11 children were killed by the blast and some 47 civilians are receiving treatment in local hospitals for bomb-related injuries.

The same source reported that the Turkish Ministry of Defense has attributed the attack to Kurdish PKK/YKK militias. No group has formally claimed responsibility, as of yet.