There are reports of chaos, conflicting information, and snaking queues at airports across Morocco as desperate tourists try to get out before the last scheduled international flights leave on Thursday, March 19. 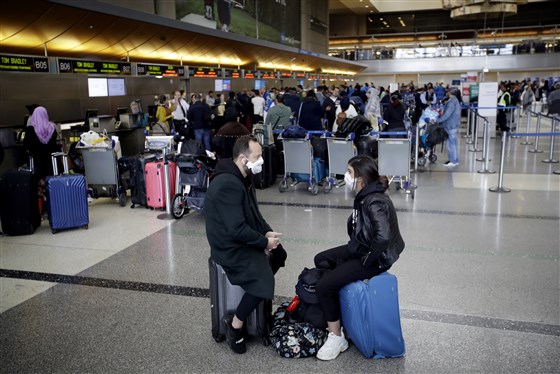 Tourism hub Marrakech has been overrun with tourists queuing to secure seats or get on standby lists for flights home. There are reports of three to four hours waits at the airline counters.

Stranded foreign nationals are calling for their governments to do more and help repatriate them. The situation is very fluid, with so-called “rescue flights” being arranged, then canceled last minute. It’s unclear if Moroccan authorities or the airlines are behind the cancellations.

There are now 49 confirmed cases of the coronavirus in Morocco, including two deaths and one recovery.

In a positive development for stranded Belgians, Foreign Minister Phillipe Goffin announced his government was chartering repatriation flights that will enable 720 citizens to leave Morocco on Wednesday, March 18.

Brussels Airlines will take Belgians home on two flights each from tourist hotspots Agadir and Marrakech.

The Australian Embassy in Morocco announced on Wednesday, March 18, that as of March 17, 85 Australians had managed to exit Morocco on commercial flights.

“We expect more flights to leave from Marrakech before Moroccan airspace is expected to close on Thursday 19 March. The Australians who managed to fly out were at Marrakech airport. We will continue to post updates during the course of the day,” the Embassy said in a Facebook post.

Australian tourists are in a difficult position as they are no longer able to transit through the EU since it closed its borders to non-essential travelers on Tuesday. To make matters worse, sources told Arabia Policy that Australians have been bumped off flights to make way for citizens of air carriers’ home countries.

The British and French Embassies have been updating their citizens on the release of new commercial flights via Facebook. Many citizens of those two countries have been successful in securing newly released tickets or having tickets for later flights honored if empty seats are available.

On March 17, British Ambassador Thomas Riley thanked British citizens stuck in Morocco for their “patience and forbearance” in the face of such a stressful situation.

He also said the UK is bringing in “30 flights over the next three days with British Airways, RyanAir, Easy Jet, and TUI.” The flights are set to depart mainly from Agadir and Marrakech, where the majority of tourists are currently stranded.

Riley also told Brits to contact their travel agency, tour or flight company and go present themselves in person at the airport desk if they are unable to call.

The French Embassy is encouraging citizens to keep an eye on the flight company websites and to be wary of giving back details to intermediaries or ticket re-sellers. Extra flights to France are being operated by Air France, Transavia, and Easyjet.

Tourists have used various means to secure plane tickets, with many engaging family members to sit on airline websites and try book tickets simultaneously in order to secure a flight out.

It is unclear how many French and British citizens have managed to leave Morocco and how many tourists from around the world remain holed up in hotels across the country.

The Spanish Embassy announced on March 17 that ferries between Ceuta and Melilla and the Iberian peninsula have recommenced. The crossings are weather-dependent and, like flights, subject to change.