The United Arab Emirates now has 153 confirmed cases of COVID19 and has suspended all international flights for two weeks and introduced a raft of new closures in its fight against the virus. 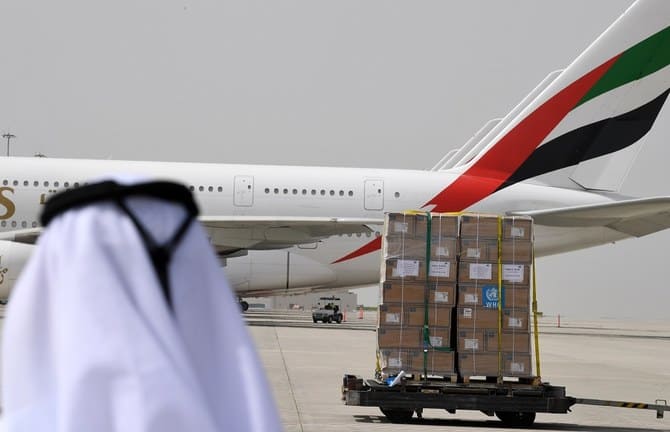 Airline Hub at a Standstill

International transport hub, the United Arab Emirates (UAE) began the week by announcing the suspension of all inbound and outbound passenger flights for two weeks starting from March 25 to curb the novel coronavirus (COVID19) spread.

Repatriation flights will be exempt, as are cargo flights, the General Civil Aviation Authority, GCAA said while stating that the decision will be open to re-assessment.

In line with the government’s decision, Dubai flagship carrier Emirates Airlines announced the suspension of all international flights. Emirates has issued conflicting statements but it appears at this time that repatriation flights and cargo will remain temporarily unaffected.

“As per the UAE government’s directive, Emirates will temporarily suspend all passenger services for two weeks starting from 25 March 2020. We are very sorry for any inconvenience caused to our customers and travellers,” said an update on the Emirates website issued Monday morning.

In a statement issued on March 22, by the Emirates Group said “Having received requests from governments and customers to support the repatriation of travellers, Emirates will continue to operate passenger and cargo flights to the following countries and territories until further notice, as long as borders remain open, and there is demand: the UK, Switzerland, Hong Kong, Thailand, Malaysia, Philippines, Japan, Singapore, South Korea, Australia, South Africa, USA, and Canada.”

The airline will also cut employees’ salaries by 25-50% for at least three months in lieu of laying off staff. Group Presidents Sir Tim Clark and Gary Chapman have agreed to to forfeit their own salary for the same period.

Abu Dhabi-based Etihad Airways has not yet suspended flights but is changing routes and implementing cost-cutting measures to deal with the impact of coronavirus.

The latest advice from Etihad posted on March 23 said “in compliance with government directives, or due to the impacts of travel restrictions, we have suspended or reduced the number of flights on many routes”.

What began as a promising start to the year after recording the company’s best month ever in January, Etihad, like all airlines around the globe is scrambling to maintain operations in such uncertain times. Etihad’s Chief Executive Tony Douglas told UAE news agency The National on March 22.

“By March, we and the rest of the industry were in negative sales as the cost of theoretical cancellations was greater than the cost of sales,” Douglas admitted.

“No one’s crystal ball is well-calibrated enough for this, the trick is to embrace the ambiguity, be agile and be adaptive,” Douglas said. He added that in the meantime Abu Dhabi’s state carrier are “doing all we can to conserve cash.

The GCAA hinted at a relatively quick return to service stating, “additional examination and isolation arrangements will be taken later should flights resume in order to ensure the safety of passengers, air crews, and airport personnel and their protection from infection risks.”

The International Air Transport Association estimates the COVID19 pandemic has cost airlines based in theMiddle East $7.2 billion in revenue as of March 11 due to the cancellation of 16 000 passenger flights since the beginning of 2020.

Meanwhile, UAE residents are coming to grips with the latest raft of closures as the country’s COVID19 fight enters a new phase.

The UAE Ministry of Health & Prevention and the National Emergency Crisis and Disasters Management (NCEMA) announced its decision to “close all commercial centers, shopping malls along with fish, meat and vegetables markets after 48hrs and for a renewable period of two weeks” via Twitter on March 23.

“The decision excludes pharmacies, and food retail outlets, including cooperative societies, grocery stores, and supermarkets, along with fish, meat and vegetables markets dealing with wholesalers,” the Ministry added.

Restaurants can only stay open if they offer takeaway options.

Ministry of health & Prevention and the National Emergency Crisis and Disasters Management decided to close all commercial centers, shopping malls along with fish, meat and vegetables markets after 48hrs and for a renewable period of two weeks.

The UAE’s Interior Ministry and NCEMA renewed calls on March 23 for the public to respect COVID-19 preventative measures by staying home, avoiding public places and only going out to purchase essentials or necessary jobs, adding that “the UAE law on communicable diseases, which includes fines and jail terms, will be enforced against all violators.”