Thousands turned out in Tel Aviv to voice their outrage at a coalition deal. 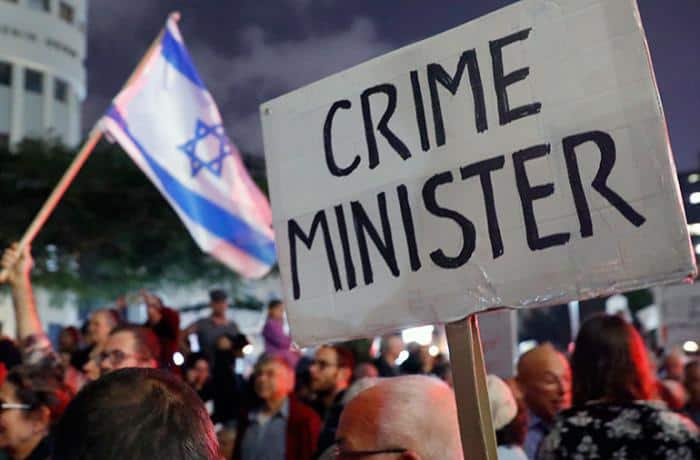 Thousands of Israelis demonstrated in Tel Aviv on April 26 to protest the new unity government comprised of outgoing Prime Minister Benjamin Netanyahu and his former rival in the elections, Benny Gantz, and their plan to annex parts of the Palestinian territories.

The unity government’s agreement provides for starting a bill to annex the Jordan Valley and Israeli settlements in the occupied West Bank in early July.

“The anti-annexation demonstrators demonstrated, in the most recent protest of the (Black Banners) movement, in Rabin Square, central Tel Aviv,” the Peace Now movement reported on Twitter.

Peace Now added that “these actions corrupt our democracy. We must prevent the plans of (Prime Minister Benjamin) Netanyahu and (Benny) Gantz, to annex parts of the West Bank.”

Live: Peace Now anti-annexation activists at the latest Black Flag pro-democracy protest at Rabin Square in Tel Aviv. The actions corrupting our democracy don’t stop at the Green Line. We must prevent Netanyahu-Gantz government’s plans to annex parts of the West Bank! pic.twitter.com/dQE9LXqGDt

The protesters have slammed the unity government deal, which gives Netanyahu the power to appoint judges and legal officials, saying it “crushes democracy” and aims to rescue Netanyahu from his corruption charges.

The demonstrators voiced their opposition to Netanyahu’s position as prime minister of Israel as long as he is suspected to be a criminal. Netanyahu is scheduled to appear in court next month on charges of fraud, breach of trust and accepting bribery.

Netanyahu and former military leader Benny Gantz, the leader of the Blue and White party, signed an agreement to share power on April 21 after weeks of negotiations on how to manage the COVID-19 crisis.

The unity agreement includes the formation of a new government composed of 32 ministers for six months to confront the COVID-19 crisis, then expand to include 36 ministers in total, the largest government in Israel’s history.