Saudi Arabia is using the latest technology to reinstate access to its holy sites. 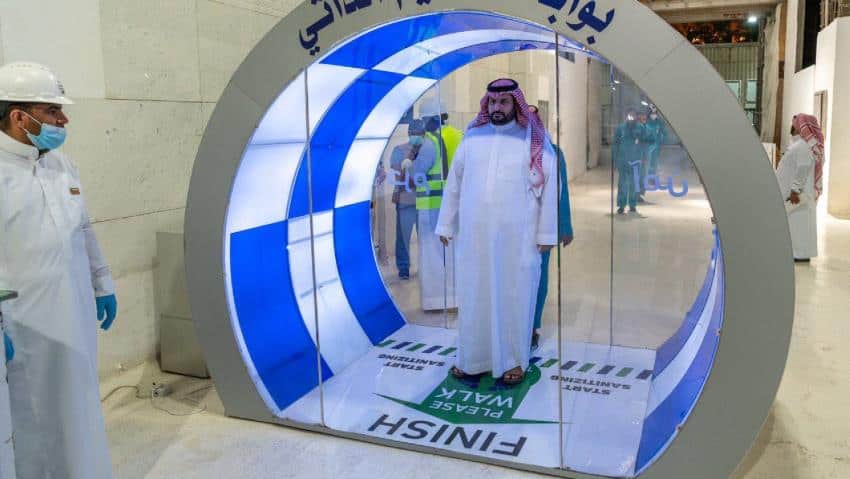 The Saudi kingdom is applying high-tech solutions to again allow access to its important Islamic holy sites. Saudi Arabia’s Ministry of Islamic Affairs is resisting calls to reopen mosques too early, but technological solutions could provide access to holy sites under strict supervision.

On May 7, Saudi newspaper Al Arabiya released footage of Saudi “self-sanitation gates” at the entrance of Mecca’s Grand Mosque and the Prophet’s Mosque in Medina. The gates spray anyone passing through with a sanitizer to sterilize anyone entering the holy sites.

The sanitation gates had already seen some application in several hospitals and police stations. The earlier gates could spray a single individual but the models introduced at Mecca’s holy sites would spray several people in a row as they passed through the devices. A Dubai-based manufacturer of the sanitation gates expects the systems to become a global “new normal,” similar to how metal detectors became prevalent following the 9/11 attacks in the United States.

The Grand Mosque in Mecca that hosts the Kaaba already featured thermal cameras, installed at the end of April. The cameras monitor the body temperature of anyone present in the building, allowing officials to potentially monitor large crowds.

The cameras have the capacity to scan up to 25 people at the same time and are placed at the entrances of the mosque’s courtyards. Authorities do not currently not need to use the cameras, as access to Islam’s holiest sites is still restricted due to COVID-19 measures.

In Medina, the thermal cameras have been installed at the local Prophet’s Mosque. The cameras may soon allow the reopening of the holy sites that are normally accessible day and night throughout the year.

Outside its holy sites, Saudi Arabia is monitoring the health of its citizens from the skies. Saudi authorities have partnered with the Red Crescent to fly drones over its cities, using thermal cameras to check the body temperatures of people passing below. The drones are used to monitor shoppers at open-air markets and check workers on the way to their offices.

Drones have been used for several COVID-19-related measures around the world, from spreading information to citizens in South Africa and Morocco, to spraying disinfectant in Colombia, Chile, India, Indonesia, the Philippines and the UAE.

Past and future meet

The technological solutions are offering some hope for a return to normalcy after the pandemic eases. With Saudi Arabia’s function as the host of millions of Muslims performing the once-in-a-lifetime Hajj pilgrimage, it is eager to find whatever solutions could reopen the gates of its cherished holy sites.

As the pandemic continues, it is increasingly clear that the COVID-19 crisis could forever change how we use technology to monitor public health. China’s lockdown lifts have revealed far-reaching use of modern technology to ensure citizens do not spread the virus.

Apps, thermal scanners, and digital notification and data-sharing are all crucial parts of a post-COVID-19 world. Saudi Arabia already testing several options, even before lifting restrictions, should be an indication that the presence of monitoring technology will be a part of the future, even when it comes to normally low-tech traditions such as religious observance and pilgrimages.