Qatar Airways CEO: ‘We Are Not Taking Advantage’ of COVID-19

Controversial Qatar Airways CEO says the airline is going to keep flying but will soon need a cash-injection from the Qatar government. 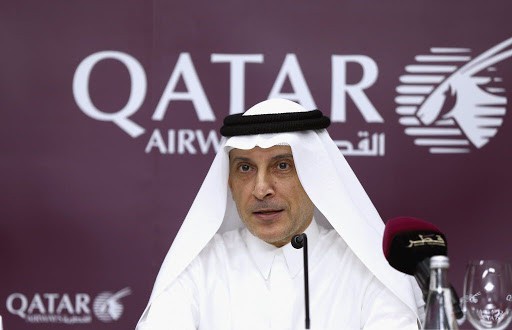 Now, the cash-strapped CEO is pledging the Qatari flag carrier will keep operating to get people home to their families and not just to profit from the extraordinary situation the world finds itself in as a result of COVID-19.

“We will fly as long as it is necessary and we have requests to get stranded people to their homes, provided the airspace is open and the airports are open,” al-Baker told Reuters on March 29.

“We have received many requests from governments all over the world, embassies in certain countries, requesting Qatar Airways not to stop flying,” the airline chief said.

Thousands of people have been left stranded in foreign lands or had to dramatically alter their travel plans last-minute as countries close borders amid the global coronavirus pandemic.

The airline industry has been hit hard and many companies were forced to scale back or suspend operations completely, making Qatar a rare exception.

Rival Gulf carriers Etihad Airways and Emirates, for example, had to cease operations on March 25 after the UAE imposed a ban on all flights in and out of the international air transit hub.

Qatar Airways has not only continued flying but even began “upgrading flights to larger aircraft or adding new flights to help get people home,” according to their Facebook page.

Many of the stranded customers Qatar is purporting to help get home have, however, complained of price-gouging and profiteering.

One Facebook commenter, pointing out the $7,645 plus price tag on a one-way flight from Perth, Australia to Birmingham, England said, “This is NOT helping people get home,” calling on the airline to “stop taking advantage of this situation.” Others, however, praised the airline for its flexibility and responsiveness to the COVID-19 crisis.

Al-Baker denied the resemblance to profiteering, maintaining, “We are not taking advantage … this is a time to serve people who want to be with their loved ones in a very trying time.”

To support his argument, al-Baker underlined that Qatar Airways has been running many fights at under 50% occupancy, causing the company to spend money at an alarming rate, leaving only enough to stay afloat for a “very short period.”

“We will surely go to our government eventually,” al-Baker said.