At least 6 people, including a policeman, were killed on Monday, when four militants stormed the Karachi Stock Exchange, the financial capital of Pakistan, in an attack claimed by a separatist group from the neighboring province of Balochistan. 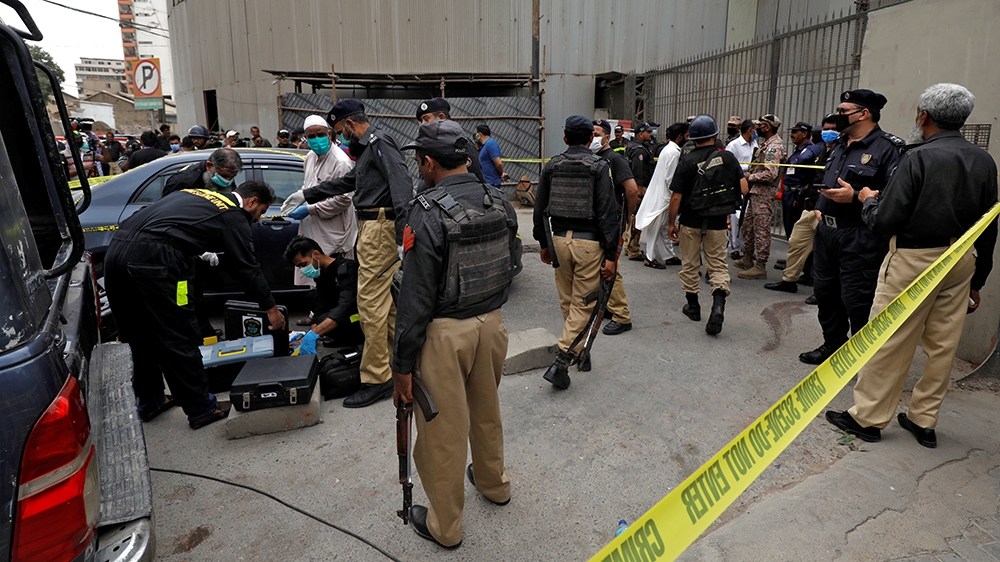 At least six people, including security men, were killed when four gunmen stormed the Karachi Stock Exchange on Monday in Pakistan’s financial capital. A separatist group from the neighboring province of Balochistan claimed responsibility for the attack.

The building is located in a highly secure area and also houses the main offices of several private banks.

Karachi police chief Ghulam Nabi Memon said, on June 29 that “four guards and a civilian were killed” alongside a policeman “in a terrorist attack with a bomb and a machine gun.”

He added that “Four attackers have been killed, they had come in a silver Corolla car,” which would bring the total confirmed dead to 10 people.

In contrast, the manager of the leading aid organization in Karachi, “Edhi,” announced that seven people were killed and seven wounded.

Details of the attack

Video from inside the Pakistan Stock Exchange building – intense firing can be heard pic.twitter.com/7xxYW92nHo

The sounds of gunfire can be heard in many videos shared online, and local television stations showed footage of the police surrounding the building.

“A bomb disposal squad had also been called to the building and was trying to clear it of explosives,” Shazia Jehan, a police spokesman, said.

Radwan Ahmed, a police official at the scene of the attack, said that gunmen opened fire at the entrance and entered the stock market floors.

Inside the stock exchange, stockbroker Asad Javed said he and others took shelter inside their offices.

“I was on the ground floor when I heard gunfire and an explosion and people scattered for safety,” Javed added.

The heavily armed special forces cordoned off the building in the heart of the city’s financial district, where the State Bank of Pakistan is located, as well as the headquarters of many national and international financial institutions.

“There was an attack on the PSX compound earlier today. The situation is still unfolding and management, with the help of security forces, is managing the security and controlling the situation.” the Pakistani Stock Exchange said on Twitter.

There was an attack on the PSX compound earlier today. The situation is still unfolding and management, with the help of security forces, is managing the security and controlling the situation.