Giant swarms of locusts are making their way to the Middle East, devouring crops along the way. 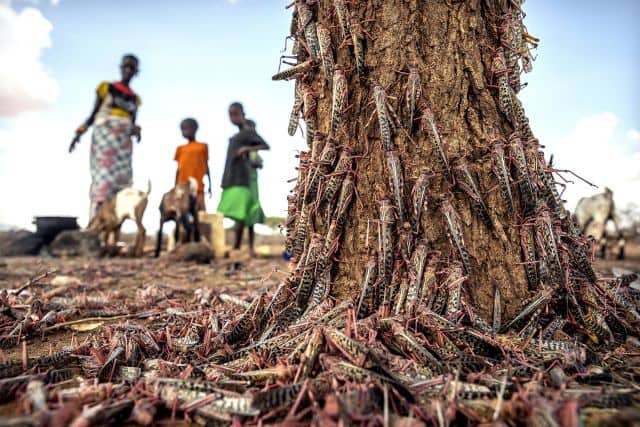 Swarms consisting of millions of locusts are approaching the Middle East, devastating farm land and livestock as they make their way north. Recent swarms have destroyed most of the crops in Ethiopia and are impacting livelihoods and food security wherever they pass.

Controlling desert locust swarms takes time and effort, warns Qu Dongyu, director-general of the Food and Agriculture Organization of the United Nations (FAO). “Our gains have been significant, but the battle is long and is spreading to new areas,” Dongyu told a virtual gathering of stakeholders and FAO officials on May 21. “It is clear that we cannot declare victory yet. Upsurges of this magnitude are rarely defeated in a few months.”

Efforts to limit the impact and halt swarms have consisted of spraying areas where the ravenous insects descend. The difficulties in tracking swarms and spraying pesticides means that locusts often outmaneuver airplanes and helicopters used to identify and spray them. Spraying pesticides also impacts the health of crops and animals, which further endangers food security in some of the worst-affected regions.

Locusts have been breeding in the Horn of Africa and are expected to form new swarms in June. The new swarms pose a significant threat to South Sudan and Sudan, the Sahel region of West Africa, and even Pakistan and Iran. As June is the start of harvest season in many countries, the new swarms are expected to damage local food production and the livelihoods of thousands of people.

A threat larger than ever before

“I have a lot of experience with locusts, but this is my first time to see such a size of a swarm,” Mehari Tesfayohannes, chief information and forecasting officer for the Desert Locust Control Organization for Eastern Africa, told Vox. Recent rains fostered ideal conditions for the insects to breed and converge.

Desert locusts are normally solitary animals but conditions can trigger a “gregarious state” causing them to form giant swarms that can travel up to 100 miles per day. According to the FAO, the locusts pose a threat to Middle Eastern and North African countries as far north as Iraq and Jordan, and as far west as Mauritania. With governments preoccupied with COVID-19, the FAO is warning that the swarms could seriously impact food security, with some already spotted as far north as Dubai.