The National Circus may be closed due to COVID-19, but that is not stopping Egypt’s famous big cat-taming family from taking the show from their home to yours via Instagram. 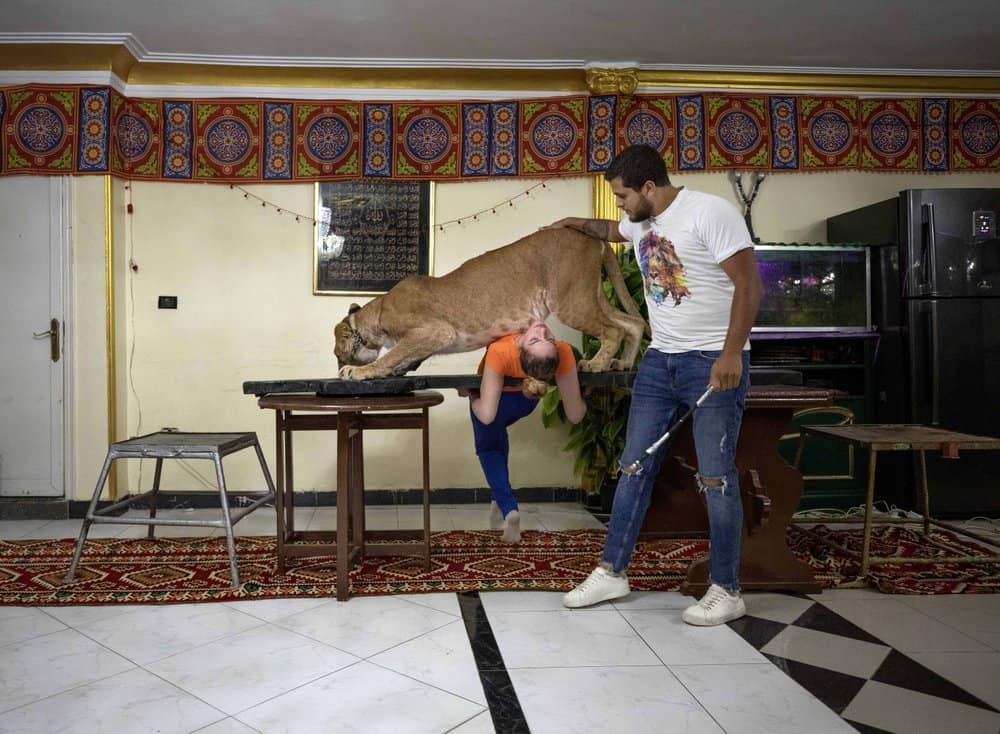 Like many other entertainment businesses, the big top of Egypt’s National Circus has fallen silent in recent weeks due to the coronavirus pandemic. Some of the circus’s most famous stars, the El-Helw family and their big cats, are still putting on shows from their Cairo lounge room, giving a new meaning to the idea of “working from home.”

Lion tamer Ashraf el-Helw is getting ready to make another video showcasing his tame lion Joumana and her tricks from his Cairo lounge room instead of the big top. Clips from his first show featuring an adult lion eating meat from his mouth and jumping over his sister Bushra created a buzz on social media.

With the message, “stay in your homes to keep safe,” Ashraf posted the videos to his Instagram account, where they sit alongside hundreds of other photos and videos of the young man posing with his beloved big cats.

“Since I opened my eyes to the world, I found lions around me,” Ashraf told the Associated Press on May 1, and his social media goes to show not much has changed in the past 26 years.

“They are like my children,” his sister and fellow lion trainer Bushra said about the animals, which have been at the center of the family’s fame and fortune for over a century.

Ashraf and Bushra, alongside elder sisters Ousa and Luba, are following in the footsteps of a proud el-Helw family tradition of working with the majestic predators. Ashraf’s grandmother, Mahassen el-Helw, made a name for herself as the Arab World’s first female tamer while Ashraf’s grandfather, Mohammed el-Helw, was famously mauled to death by a lion during a performance in 1972.

The big cat-wrangling dynasty brings the lions in from their family farm, an hour outside the sprawling megacity of Cairo, to their Nile-side apartment specifically for the “work from home” performances.

The el-Hewl’s have, nevertheless, copped plenty of criticism over how they treat the animals and for continuing what for them is a family tradition, but for many is a barbaric and outdated abuse of wild animals for human enjoyment.

One of Egypt’s leading animal rights activists, Dina Zulfikar, finds fault in the frivolous way the el-Hewl’s portray their interactions with the big cats online.

“This is an irresponsible and foolish behavior,” she told the Associated Press on May 1.

“They are not pets, they are wild animals,” Zulfikar stated, reminding the el-Helws that it is illegal to keep wild animals in a private home.

Zulfikar has spent the last decade campaigning for better treatment of animals at the Giza Zoo and working to stop wild animal trafficking in Egypt and Africa.

Pressure from Revitalise Giza Zoo campaigners, a sub-group of Animal Welfare Awareness Research group (AWAR) coordinated by Zulfikar, has brought about a dramatic improvement of the living conditions for the hundreds of animals housed in Egypt’s largest zoo.

Animal welfare remains a major concern in Egypt, where Zulfikar says “the law that protects domestic animals is extremely vague,” while laws protecting wild animals “are wonderful—too bad they are not properly enforced.”