Militias that formed to fight ISIS are now providing burials for locals who succumbed to COVID-19. 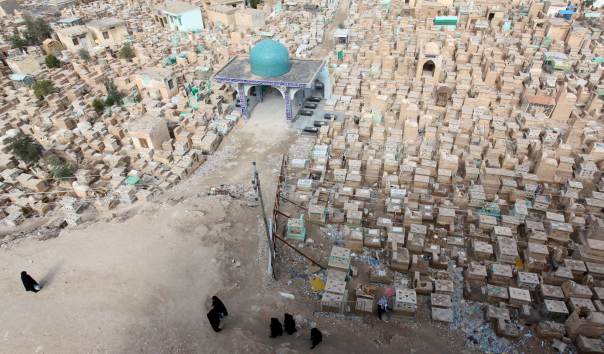 In Najaf, one of the holy sites in Shia Islam, local militias are providing burials for COVID-19 victims. The city has allotted a special graveyard for those who have died of complications linked to the virus alongside the “Valley of Peace,” or Wadi al-Salam cemetery, the biggest cemetery in the world.

While religious rites are usually performed in public ceremonies, the Imam Ali Combat Brigade that is performing the burials has to do so in total isolation. “So far, we’re coping,” the militia’s paramedic Sarmad Ibrahim told Reuters. But the small group of volunteers would be hard-pressed to deal with an increase in COVID-19 deaths.

“If we start receiving more bodies we might not be able to bury according to religious rules,” Ibrahim said.

The work is physically difficult and emotionally taxing, but the group is not garnishing much praise. Stigma and fear over the coronavirus mean the group volunteers have struggled to attract new members. The roughly dozen men have faced alienation from friends and families as many fear infection.

“If we face a shortage of men, I’ll have to ask friends or other fighters to come and help us. I’m afraid that if someone catches the virus, relatives will blame me for it,” said Abu Sajad, a 46-year old veteran militiaman-turned-volunteer.

While the volunteers have been able to ensure bodies are washed and buried with dignity, the recent increases in reported cases in Iraq is a troubling development. Within two weeks, the number of cases has doubled, from 3,000 to 6,000.

After having helped defeat ISIS, this new enemy is posing a significant challenge to ensuring the beliefs and dignity of COVID-19 victims.

Abdul Hassan Kadhim, the leader of the volunteer team, told Reuters that “in the beginning, bodies were brought back to the morgue, where they stayed for up to 15 days, they ended up being buried without proper religious rites.” Because of the work the volunteers are doing, Muslims can now be buried within days in adherence to Islamic customs.

The Shia militia has had to face a crash course in the religious practices of their neighbors of different faiths as they also had to bury two Christians recently. “We know they’d prefer to be buried in their own graveyards. But because of the pandemic, they now rest here,” Abu Sajad said as he knelt in front of one of the Christian graves.

“We asked for advice on Christian burials, to be able to carry them out according to their own rituals and traditions,” Abu Sajad continued. “I didn’t know about them before. But we did everything the way our Christian brothers told us.”