Inside a Drastic Lockdown : Living and Working through Confinement in Jordan

Jordan has implemented some of the strictest measures to curb coronavirus seen in the Middle East so far. Arabia Policy spoke to a development-worker stationed in Amman to learn what it’s like living under the drastic lockdown and how it is affecting the country’s most vulnerable residents. 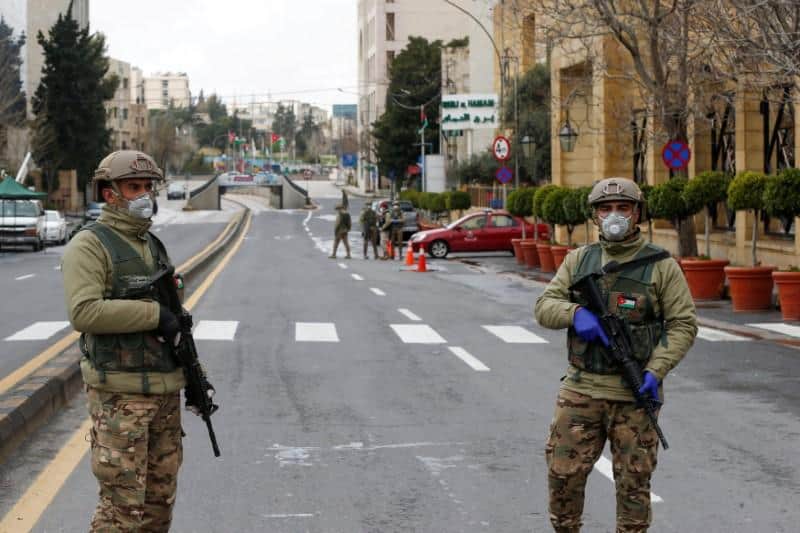 Sirens sounded across Jordan at 7:00 am on Saturday March 21 to mark the beginning of the country’s indefinite novel coronavirus (COVID19) induced curfew that has since been loosened slightly.

The government originally promised to update citizens on March 24 about when they would be able to leave the house again to purchase necessities, instead, the government deployed trucks to distribute only the most basic commodities – bread and water.

After four days of hunkering down in their homes waiting for an update on the curfew conditions, Jordanians finally received a highly anticipated reprieve on Tuesday March 25. Prime Minister Omar Razzaz announced that the curfew would be lifted from 10am-6pm on Wednesday March 25 to allow people to leave their homes to visit foodstuff stores, pharmacies and water sellers.

“Today, we have developed a comprehensive plan and a timetable to provide citizens with their basic needs with the opening of the service for delivery to authorized service providers from large supermarkets starting next Thursday, and delivery mechanisms will be announced,” Razzaz said.

The Prime Minister empathised with Jordanians, saying “I fully understand the state of anxiety and tension among some and your need to secure your household supplies of food, bread, water, medicine and fuel. I also understand that the curfew is an abnormal and unusual situation for Jordanians in this safe country and has negative and psychological repercussions for us all.”

Following Razzaz’s declaration, Minister of State for Media Affairs Amjad Adaileh reiterated stressed the “new measures do not mean lifting the curfew, and individuals will only be allowed to purchase their basic needs, on specific dates, and at short times.”  The BBC reports some 1600 Jordanians have already been arrested since Saturday for falling foul of the stringent curfew.

Jordan’s coronavirus tally stands at 153 confirmed cases after Minister of Health Dr Saad Jaber reported that 26 new infections had been recorded around the Kingdom on Tuesday.

The Danish Refugee Council’s Economic Recovery Manager Rahul Mitra told Arabia Policy that he had been well prepared for what he called a “drastic” shutdown. However he is concerned about the impact the shutdown will have on vulnerable Jordanians as well as the refugees and asylum seekers who make up approximately 10% of the country’s population.

“I did stock up quite a bit in preparation and I’m fortunate enough to be able to go to a grocery store and have enough cash at hand and savings that I can pull from. But there’s a lot of questions whether refugees and asylum seekers can service their needs, and if they have liquidity at the household level to actually buy supplies,” said Mitra, who has been stationed in Jordan since November 2019.

The curfew has shuttered the NGO’s seven service centres that normally function as offices and important community hubs for vulnerable populations across the Kingdom.

“Right now we’re looking more into providing direct cash assistance to beneficiaries so that they at least have enough liquidity that they can get food and medicine,” said the Economic Recovery Manager.

He also stressed that, “when you’re already struggling to make ends meet, you’re not going to be investing towards the business…your main concern is just to put food on the table and make sure your basic necessities are met.”

That raises a further challenge for aid agencies of how to actually get the cash assistance to those in need. Normally, pre-loaded ATM cards or cheques would be used, but now Mitra said the curfew has forced his organization to consider other options.

“We’re trying to look into e-wallets, direct mobile to mobile transfers so they’ll at least have that money virtually to pay their bills, to go to the grocery store, and to use mobile money to make those purchases,” he said.

Mitra, who has extensive experience managing projects that provide technological solutions to communities in poverty, warned that virtual alternatives come with their own set of problems. Technology literacy is one, household power dynamics are another, because “if there is one cell phone in the house it usually belongs to the male member and if you transfer directly to this person, then they might not make the best investment for the household.”

The seasoned International Development expert also predicts the contraction in trade between Jordan and its biggest trade partner the European Union, as well as neighbouring countries caused by the COVID-19 pandemic will “lead to a snowballing effect to the Jordanian economy.”

“I think even if Jordan is able to manage the immediate effects of the COVID-19 outbreak by inflicting all these drastic measures there’s still going to be follow-on effects because the international markets are closed now and the supply chains are affected. Time will only tell, but I think the problem is going to be long term,” Mitra said pessimistically.

On the positive side though, he said the non-governmental sector was working well together to come up with “out of the box” ways of overcoming the “unusual circumstances” created by the pandemic.

“Here in Jordan the different organisations coordinate really well, we are always on calls with not just the Danish Refugee Council but all the other organisations trying to figure out how we can solve this problem together. How do we ensure that we’re all complimenting each other’s work and not duplicating efforts, and sharing any learnings and best practices. That’s been a really good thing here in Jordan compared to other places.”

More broadly, Mitra was circumspect but hopeful that COVID-19 would raise the world collective awareness of how easy it is to go overnight from safety and security to a position of extreme vulnerability.

“The hope is that more and more people are going to realise how vulnerable their institutions are to a situation like this. How, as a society, we have made huge advancements in technology but we have invested so little in what really matters the most and in protecting the most vulnerable.

“Hopefully because this crisis is not happening in a faraway “underdeveloped” country and is on everyone’s doorstep, it is going to get people to empathise with the situation that has been endemic in most of the developing world.

“Only time will tell if that actually materialises or if that’s wishful thinking,” he concluded.